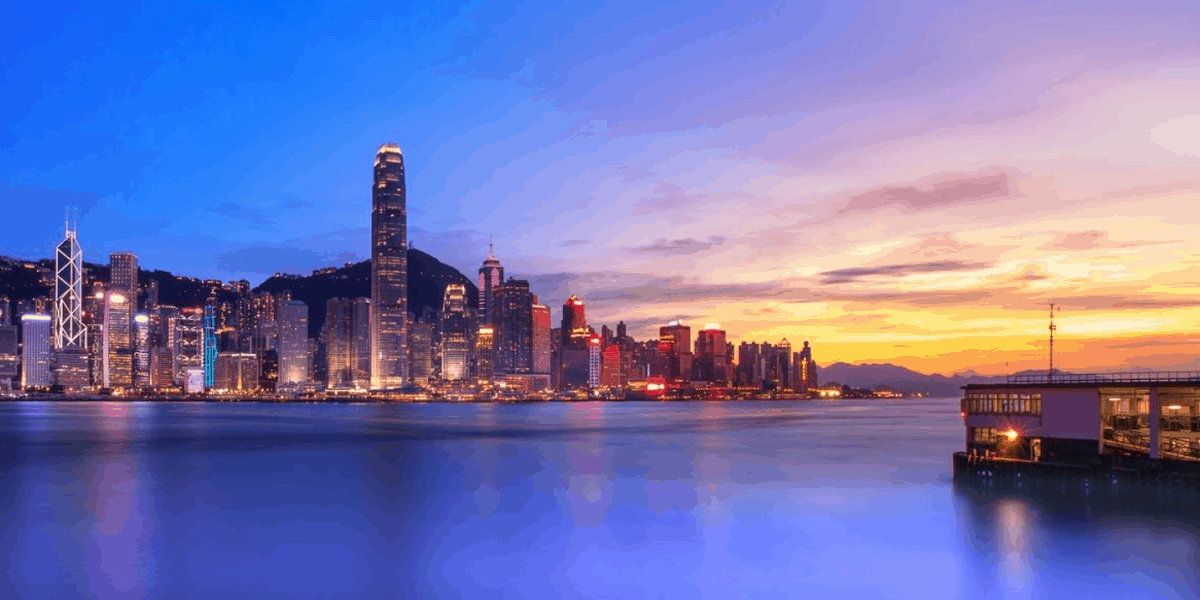 Much of South East Asia is known for beaches and jungle landscapes. On the other side, you have East Asia that is brimming with city life, and Hong Kong sitting at the top of the heap.

Hong Kong Island is made up of a small group of islands; this area has become one of the most significant and most visited areas on the planet.

Because it is closely tied to the world’s financial markets, you could think there isn’t much to do. However, being home to over 7 million people and home to the most significant number of skyscrapers, you will be surprised how many things you can find.

You have a mix of the old and the new in a city that heaves with activity. It may sit in the 21st century, yet Hong Kong doesn’t lose any of the cultural charms that come from Chinese heritage.

Here, we have 10 of the best Hong Kong attractions and the best places to visit.

10 Top Things to Do in Hong kong 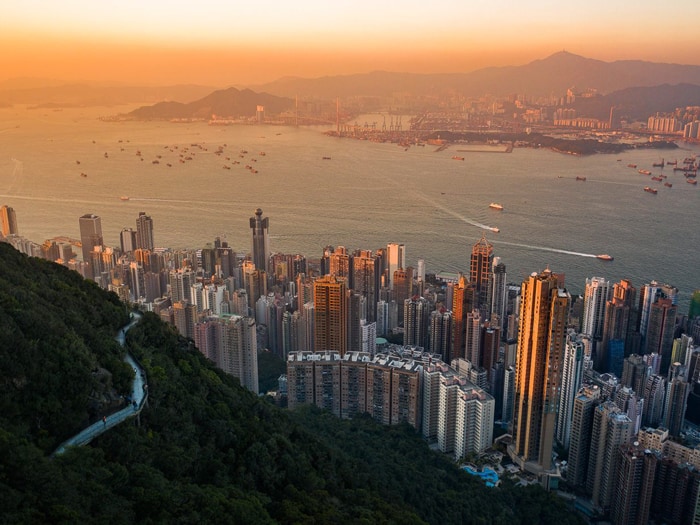 The city skyline seen from a junk boat in Victoria Harbour is fantastic, although these don’t match the view from the Sky Terrace at Victoria Peak. Also known as Mount Austin, or to locals ‘The Peak.’

You will find the highest 360-degree viewing terrace there is, and to get there, you need a steep tram ride passing several floors and levels of escalators to reach the top.

A more traditional way is by bus or cab, though you miss some of the experience.

The Peak Tram is the oldest mode of transport in the city, and it takes eight minutes for the 125-year-old tram to reach the endpoint.

Once on the summit, you have a chance to take any of the trails around the surrounding area, and for a couple of hours or so, you can see why it is one of the top things to do in Hong Kong. Part of the area is closed off to the public because it houses all the radio telecommunications equipment for the region. 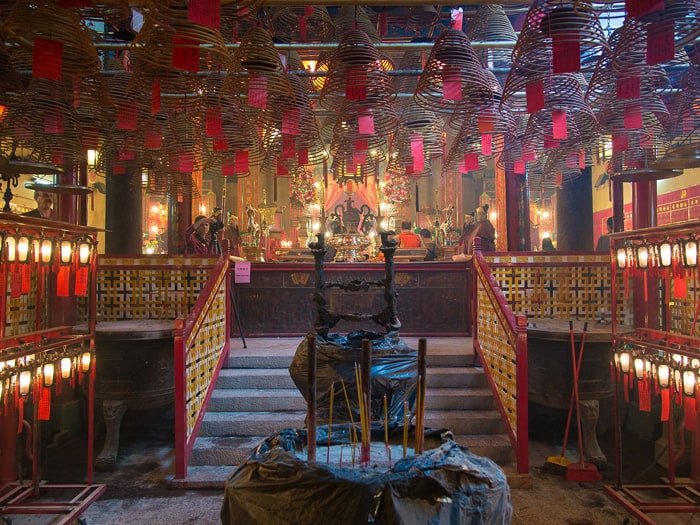 Built in 1847 during the Qing dynasty, one of Hong Kong’s oldest temples and declared monument, you will see the Man Mo Temple steeped in atmosphere. Nestled on Hollywood Road, you will be forgiven for thinking there isn’t such a place in a busy street.

‘Man’ who holds a writing brush shows dedication to gods of literature, and ‘Mo’ dedicates himself to war, and who wields a sword.

It was both a place for worship and where to go for local disputes as a court of arbitration.

Any oath in the Taoist temple would take place with a roosters beheading and be accepted by the colonial government.

In the temple, you come across two 19th-century sedan chairs that are elaborately carved and used carry the gods around in festivals. Lending to the atmosphere is the smoky air from the suspended incense coils burned as offerings by worshippers.

On one side is Lit Shing Kung, the ‘saints’ palace,’ where Buddhist and Taoist deities worship.

Kung Sor is a public meeting place and was where the disputes were settled. As you approach, you can face many of the beckoning fortune tellers and are also urged to leave selfish interest and prejudice at the door before entering. 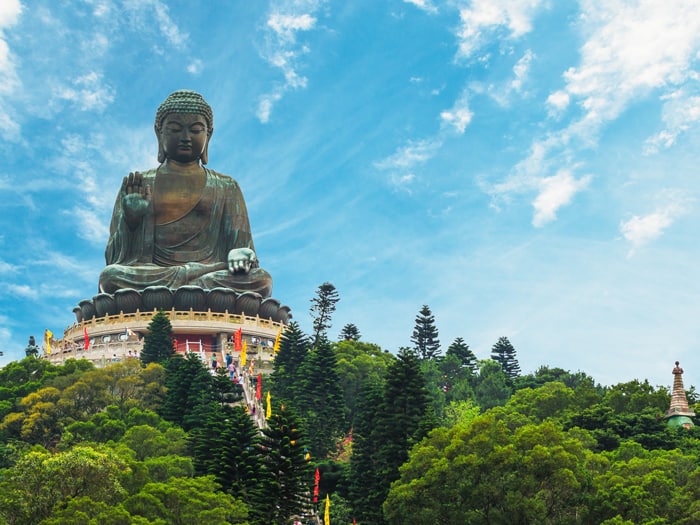 The Tian Tan Buddha, more commonly known as the Great Buddha, is one of the top places to go in Hong Kong. It is located 34 meters above Po Lin Monastery.

You take a Ngong Ping cable car to go up and enjoy a breathtaking 360-degree view over the mountains below.

While busy, the statue sits in a quiet corner of Lantau Island.

While you still get a good view of the Big Buddha, you don’t realize how big the biggest Buddha in the world is until you get up close.

The construction was no easy feat and took 12-years from start to finish. The last leg of your climb takes you up 268 steps; it is here you see the extent of the statue and the glorious views of Hong Kong and beyond.

The 10,000 Buddha’s Monastery is an absolute must-see in Hong Kong. Located in the Po Fook Hill Mountains of the New Territories area in the Sha Tin countryside, you have to climb a steep hill to get there.

The efforts are rewarded through a complex consisting of the main temple hall and a nine-story pagoda, including several shrines, pavilions, and halls.

There are 430 steps to walk up, and each level you will see yourself flanked by Buddha statues on both sides of you, and each having a different expression than the others have.

Also known as Man Fat Tsz, the monastery has become one of the most intimate cultural areas you can visit around Hong Kong. It took less than ten years to build, yet it was two decades before every one of the statues was made. You also find it isn’t 10k, and there are around 13,000 statues around the monastery. 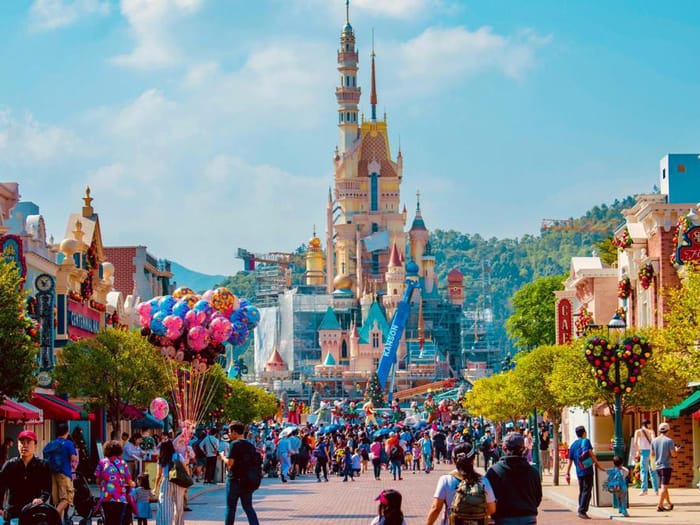 Hong Kong Disneyland is smaller than its counterparts are, and it isn’t your traditional Chinese destination.

Up until the arrival of Disneyland, you would find Ocean Park was the original amusement park.

However, if you happen to have kids with you on your journey, or you want to kick back and have some fun, then this is the place to do it. You can spot the Chinese culture sprouting up in areas designed with Feng Shui in mind.

It sits on Lantau Isle and has the favorite rides from back home and some newer ones you may not have seen.

While not in the area, if you fancy some Americana, you also have where you can see the area modeled on the Hollywood Walk of Fame.

Here you have the handprints and stars of Jackie Chan and Bruce Lee; while there are others, you may not know them as easy as the locals do. You find this on a promenade in the Tsim Sha Tsui region by the water of the harbor. 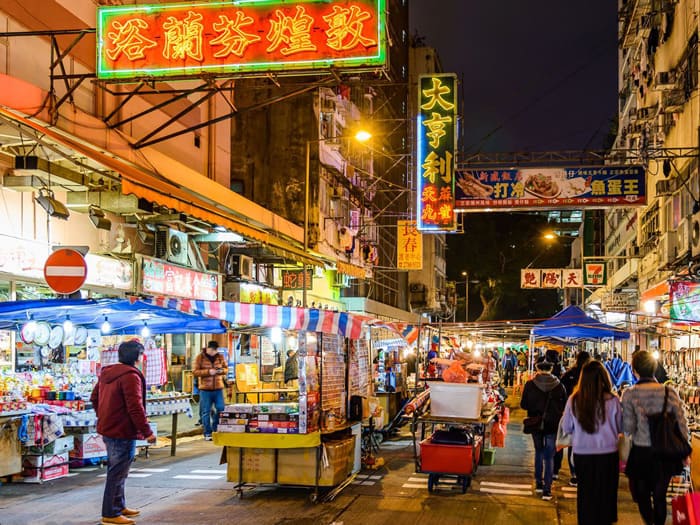 You can find most markets closing at night. However, in Asia, they spring to life at this time. One of the most famous sits on Temple Street, and it is one of the top things to see in Hong Kong.

The Temple Street Night Market has everything; you can get your fortune told; browse the endless stalls or take a seat, and tuck into some of the best Dim Sum you can have in the city.

Although lively, it is more about the experience as you may find the endless range of clothes, shoes, CD’s and DVD’s are not the thing you need or want to be lugging around with you. The night market is a great way to experience life on the street without leaving a populated area. 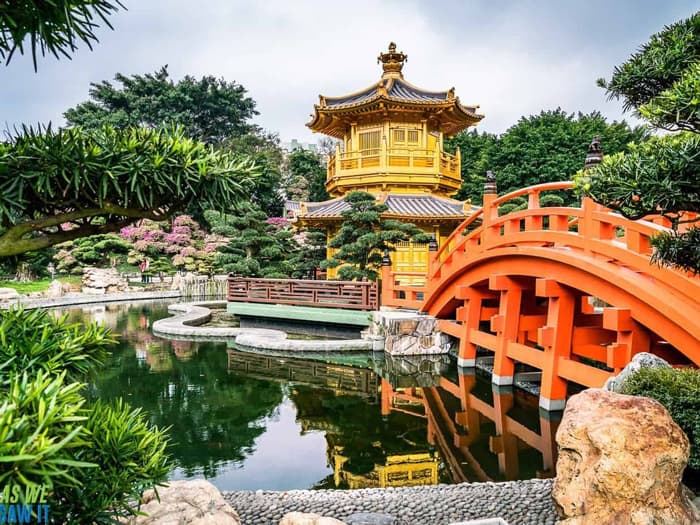 You may not spot this area from the side as local roads surround it; however, the Nan Lian Garden covers 3.5 hectares.

They built Nan Lian in the Tang Dynasty, and each area of the garden has been constructed with a one-way route in mind. As you take the given path, you pass two water ponds (Lotus and Blue Pond), and countless numbers of lush green trees.

Connected by Zi Wu Bridges, you come to the Pavilion of Absolute Perfection.

You will find all manner of souvenir shops, places to eat, and function rooms hidden in various locations in the garden. Nan Lian Garden sits close to the Chi Lin Nunnery and connects using a bridge. 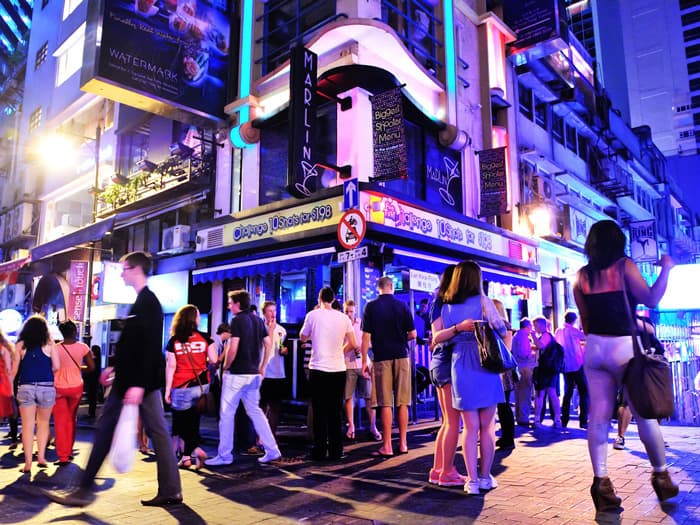 If the night is still young after taking in any of the night markets, you can take a stroll down Lan Kwai Fong. While it appears small, the loop of stores that sits in the Central District is home to around 100 bars.

It has become the party zone in Hong Kong, and you may have to squeeze through to get to the restaurants or clubs. Kwai Fong isn’t for everyone, yet it has lots of appeals and many other Asian cities are trying to emulate this kind of area.

There is one thing for sure; there are bars to suit every taste you can imagine. 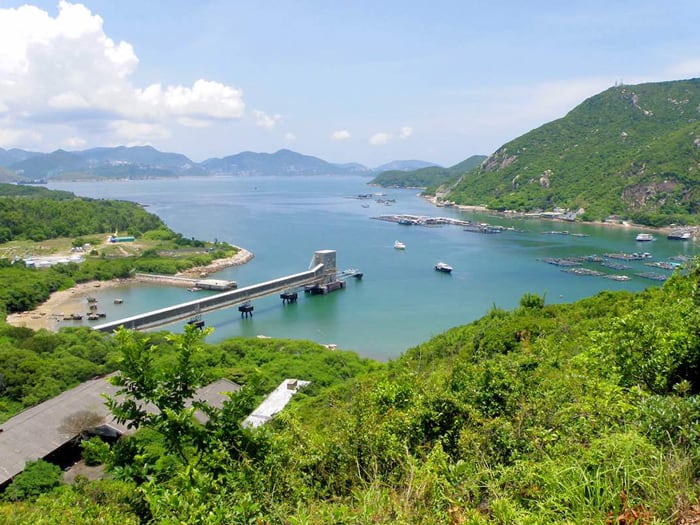 You can find a very different atmosphere by taking a 20-minute ferry to Lamma Island. It is a bit larger than a typical fishing village and is known for an abundance of seafood restaurants.

You can spend an enjoyable day exploring while unwinding from the hustle and bustle of the city. You can meander down endless small streets and check the countless stores before lazing on one of the pristine beaches in the area.

If you are not opposed to a hike, then it doesn’t take too long to get to the rewarding Pai Wan Beach, where you get the impression, you are living the idyllic island life.

You also have a few other islands in the area that may be worth a quick exploration trip. Grass Island, Lantau, Cheung Chau, and Tai Long Wan beach in Sai Kung among them.

You can also venture to Repulse Bay and Big Wave Bay, although these are often crowded. 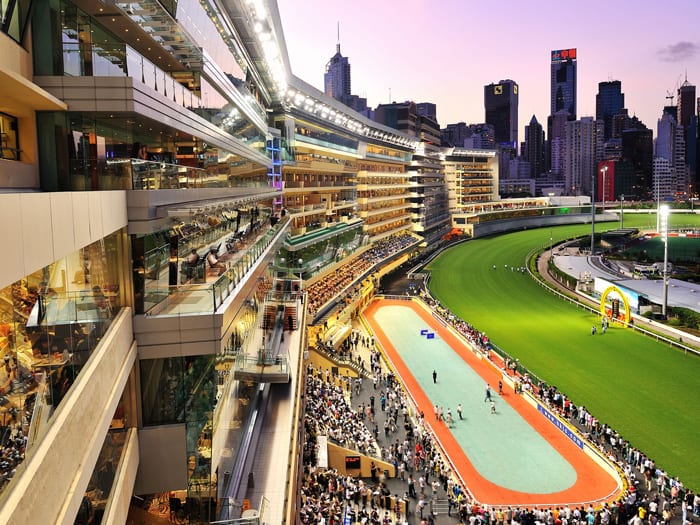 If you are thinking about what to do in Hong Kong on a Wednesday evening, there is only one thing to consider.

Like every other resident, you can take part in the ‘Happy Wednesdays’ and spend the evening at Happy Valley Racecourse.

You won’t find many cities with a racecourse right at its heart, yet thanks to the British who took local swamps and reclaimed the land, the Valley has become one of the best racetracks in the world.

Wednesday nights are all about entertainment with the races as the backdrop. You can find plenty to drink, live entertainment, and the only thing you need is to make sure no kids are tagging along.

If you wish to pay a visit, then the race season runs from September through June, so there is more than enough time to plan your travels.

It has been a staple event in the city since the first races were held in 1846. You can also find other meetings in a newer racecourse at Sha Tin Racecourse, although that doesn’t offer the same historical party atmosphere.

Here you have some of the things that offer you something very different and can fill up a good chunk of your day. However, you still have the things the city is known for, but only take up a portion of your day.

While there are faster ways to get around the harbor, nothing comes close to venturing across on the Star Ferry. Since 1880, this iconic ferry has been making 10-minute crossings over the harbor where millions get to see the skyline of the city from a unique vantage point.

If you wish to experience something unique and unlike anything else on the planet, you ought to get a ferry into Central at around eight in the evening.

You will then have unobstructed views of the daily light show. It is also possible to take a Hong Kong Junk to head off into the harbor to watch the Symphony of Lights. You don’t need to panic as this is the number one light and sound show anywhere in the world and begins at eight every evening.

With 42 of the most prominent skyscrapers, there are lots to see in the show that first began in 2004.

It can be a great end to an East Asian trip to Hong Kong, and it should be one thing you do without a doubt. 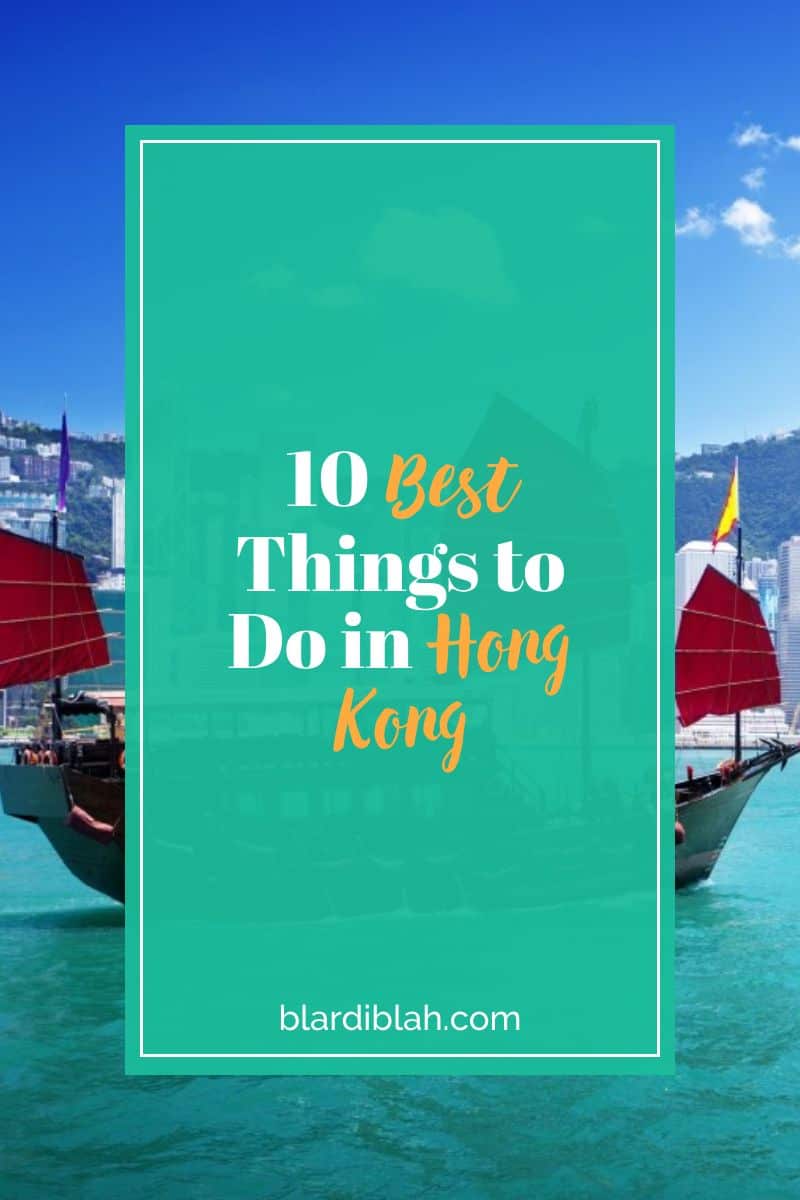