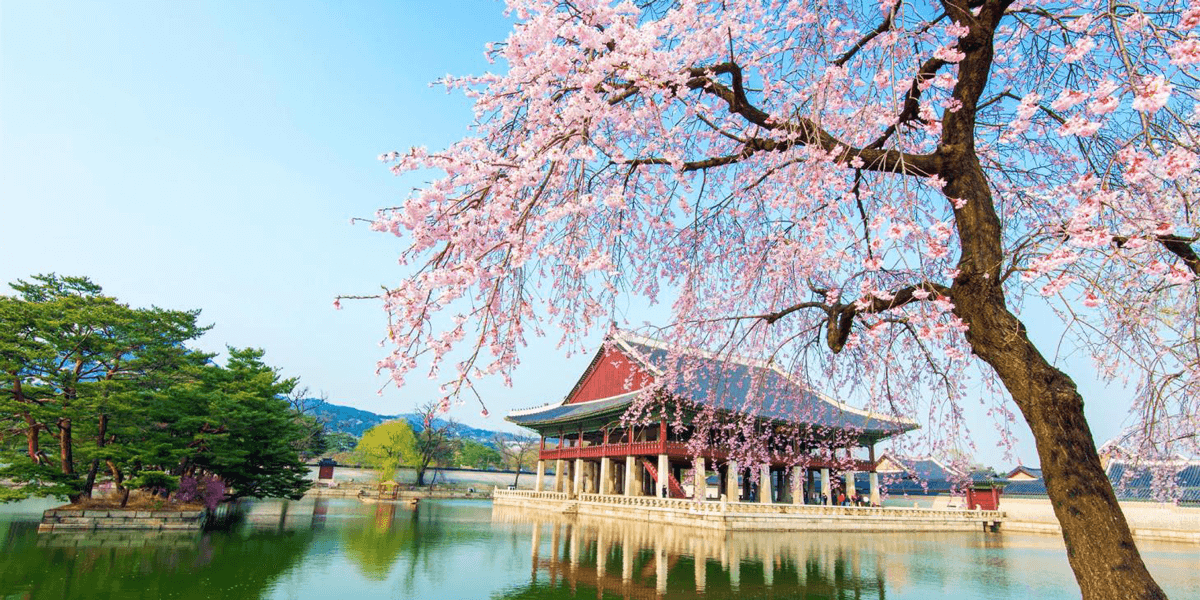 Seoul is South Korea’s capital and perhaps one of the most amazing destinations you can imagine visiting in Southeast Asia.

At first glance, you can see that they love to shop and eat, but when you get away from the markets and restaurants, you will find a wealth of history, culture, and all kinds of things to seek out and enjoy.

You can find plenty of things that are steeped in history, culture, or modern Korea we see so much of.

From Iteawon, where you find many ex-pats tends to congregate and is packed full of trendy bars and restaurants to the Gangnam area, which is in the top three regions by size in Seoul.

Here you can stroll down the side of the river Han or you can soak up the trendy atmosphere made famous by the song “Gangnam Style.” 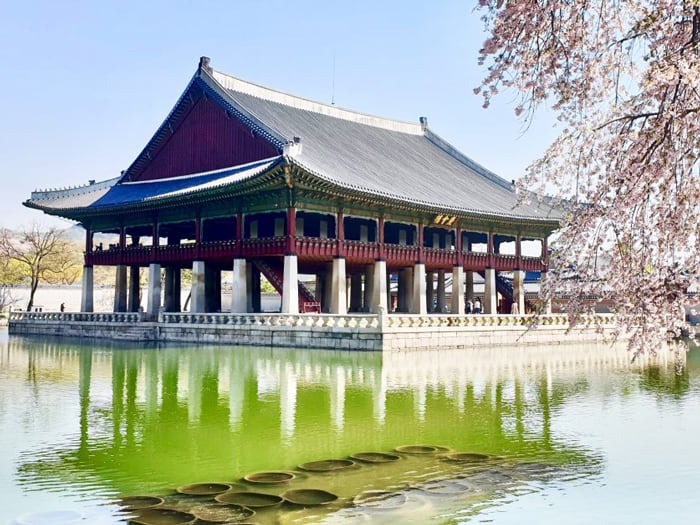 Gyeongbukgung Palace is one of Seoul’s most famous historical attractions and one of the city’s most visited sites. It was one of the most famous palaces of the Korean Joseon Dynasty and was built in the late 14th century.

It was built at the end of the 14th century. It was destroyed by the Japanese invasion around 1500 but was rebuilt and reconstructed 200 years ago.

On the considerable palace grounds, there are masses to see. One of the uppermost is the courtyard of Gyeongbukgung Palace, which is filled with clay pots that hold kimchi and fermented chili paste.

Located deep in the heart of Seoul, it is easy to reach and combine with another of Seoul’s major attractions.

The best times to stroll around the grounds are at 9.0 am, by ten, it begins filling up and can be crowded. The main reason being the changing of the guards is at ten, so be sure you have a good viewpoint.

Approximately one hour from Seoul, you will find the Hwaseong Fortress of Suwon, which is suitable for a half-day excursion. Today the fortress is included in the UNESCO World Heritage List and one of the most important historical sites in South Korea.

King Jeongjo of the Joseon Dynasty built it from 1794 to 1796. It was to shelter and honor the remains of his father, Prince Sado.

It can take about 2.5 hours to see most things, but there are ways to extend your time. Measuring 5.7 km in length, and 4 to 6 meters in height. It is possible to climb along the fortress wall, which is slightly steep in some parts, so be ready for some exercise.

Combine all of this, and it can take around 4 hours to visit the fortress, the walls, and its museum. For an excellent half-day trip, this is one of the best places to visit in Seoul. 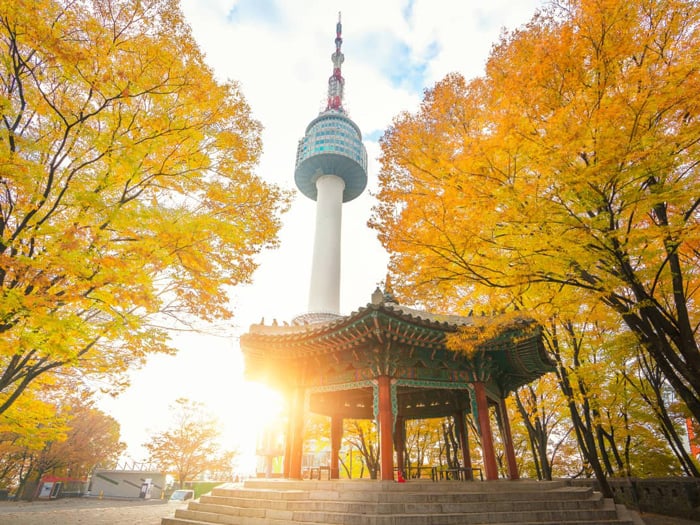 The N Seoul Tower, which stands at the top of Namsan Mountain, is the center of Seoul. A communications tower, which is also open as an observation and entertainment tower.

N Seoul Tower was initially built in 1969 to distribute television and radio signals, but has been opened to visitors and is nowadays a famous local landmark in Seoul!

When one reaches the top, you have the advantage of enjoying one of the best overall views of Seoul city.

It has also gained fame for people to go to the tower and secure a padlock on the fence as a symbol of love – this is one of the most romantic South Korea attractions you can do in Seoul. 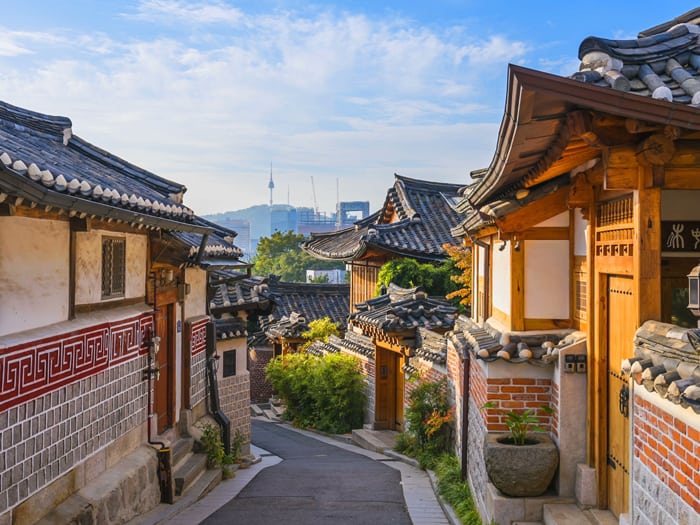 Bukchon Hanok village inside of Seoul is located close to Gyeongbukgung Palace. You can easily combine the two for a full day, and this area is one of the most exciting things to do in Seoul.

It can be fun to explore the streets and visit the houses in this traditional Korean village.

The village, which lies north of the Cheonggye River, has several houses opening their doors as guesthouses. Although they are old and picturesque, they are, by far, not the cheapest.

Be sure to get your map from the tourist information office inside the village. You can follow the hiking trail and enjoy the view from a number of lookout points. There are some excellent restaurants and boutiques in the main parts of the village.

You can enjoy yourself walking through the ancient village while tasting delicious Korean street food. 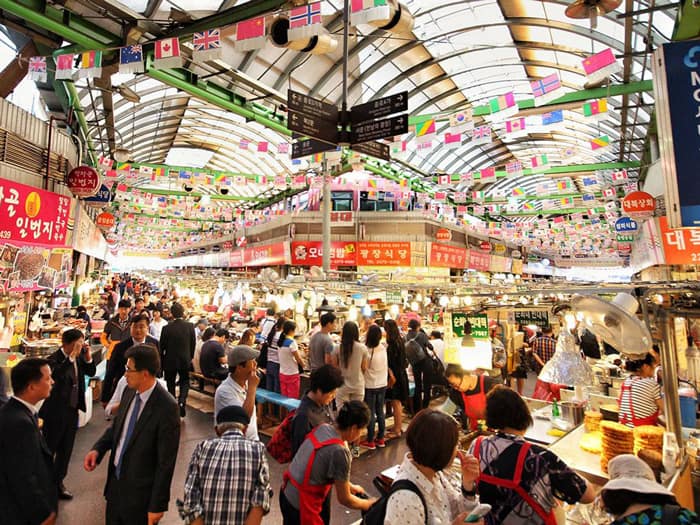 When you like to eat, one of the most appealing things to do in Seoul will probably be to indulge yourself with some Korean street food in the Gwangjang market. Formerly, Dongdaemun Market, the Gwangjang Market, is the most traditional street market in the district of Jongno-gu!

Being one of the oldest in the city, the market has probably 5,000 stores, making it the largest. Every day, more than 65,000 people attend the market!

It is known for the variety of stores that sell silk goods of excellent quality, sheets, handmade items, and antique shops. The Vintage arcade is uniquely designed and draws many young people.

Visitors are encouraged to visit between eleven o’clock and four o’clock to have the best opportunity to eat. Just make sure you are hungry when you arrive. 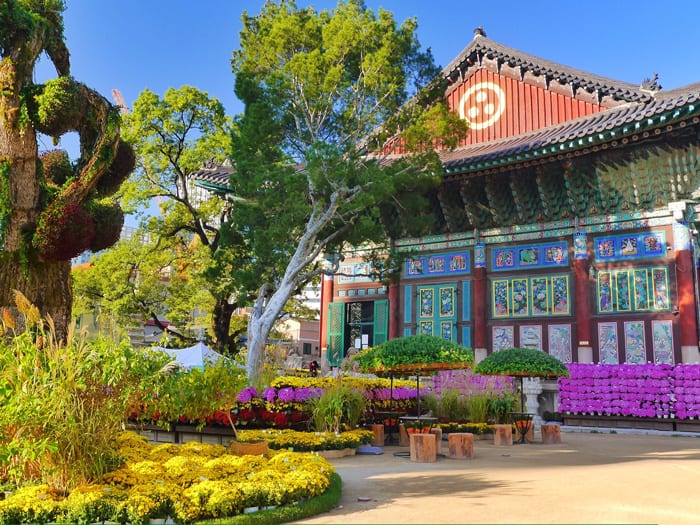 The Korean Buddhist Jogyesa Temple is situated in the middle of Seoul’s high-rise business district. There is nearly always a bustling activity of both locals and tourists coming and going.

This temple, founded in 1395, was initially being called Gakhwangsa Temple. With the Japanese invasion in 1910-1945, the temple grew into one of the strongest strongholds of Korean Buddhism.

There are 28 rings of Brahma bell in the morning and 33 rings in the evening every day. This is how the monks believe they can save those who are suffering in the world by means of the Dharma.

When you go to the Jogyesa Temple, you will see a medium-sized tree. It is Beaksong, the 450-year-old Lacebark pine standing in the temple.

Banners and paper steamers made of colored paper have been hung from the trees, and the temple hosts a temple retreat program and the annual Lotus Lantern Festival.

Although the subject matter is a bit harsh, you would be surprised how much you can see and do in the demilitarized zone on the North Korean border.

It has gone to become one of the top Seoul points of interest. Although this attraction stems from the war between the north and the south, the atmosphere is quite calm as you visit the divide in the country.

Initially starting in 1953, the DMZ came about between an agreement with North Korea, the United Nations, and China.

While the forbidden area spans 2.5 km in width and 160 miles in length, you can still get a view from the Dora Observatory, which has high-powered binoculars you can use to see across the other side.

You can also check out the Freedom Bridge, or one of the many tunnels that were dug in a bid to invade South Korea.

To get the full feel of North Korea, it is possible to stand inside what they class as North Korea, yet it is behind closed doors in the Joint Security Area, and going any further may leave you in hot water.

One thing with this area is that you can’t travel there on your own and you do need to go as part of an organized tour. There are plenty of these, and they do cater to different areas or things to see. 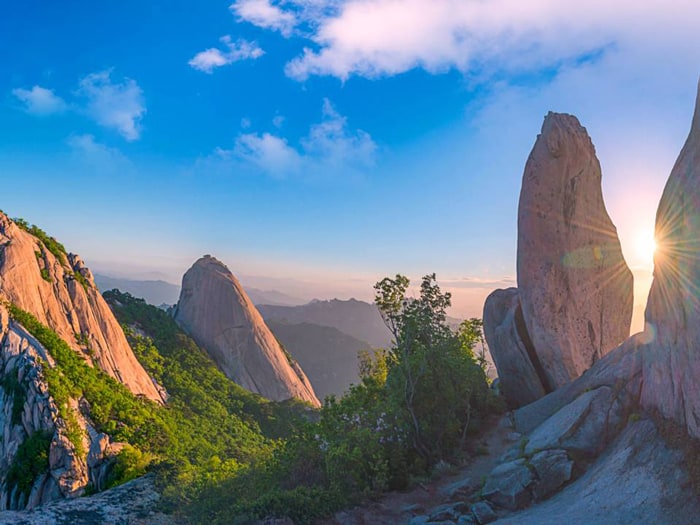 While it is a fair distance from Seoul, it doesn’t take too long to reach the Bukhansan National Park. With over 5 million visitors each year, the National Park is in the Guinness World records as the most visited National park per unit area.

Besides this, it is one of the top things to do in Seoul. It comprises hiking routes that are suitable for beginners to advanced, and it is easy to see why once you cast your eyes on the high peaks.

The park is full of streams, plants, animals, and a scattering of historic Buddhist temples. If you feel adventurous, you can hike up to the peak at 836 meters and soak up the magnificent views.

You will find most of the hikes take around four to five hours to complete, so plan for a day out if you head to this northern area of Seoul. 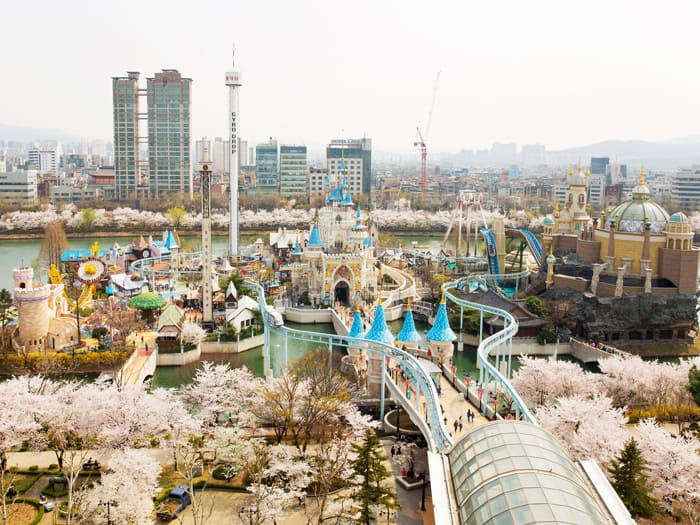 Any traveler who has kids tagging along can use them as an excuse to visit Lotte World. If you ever wonder what to do in Seoul, then this can be your answer.

It comprises the world’s largest indoor recreation complex and theme park. Besides, this is an outdoor amusement park called Magic Island, which is linked with a monorail to malls, hotels, and museums among other features.

It teaches about other countries, space, and all manner of other shows and rides to keep you entertained for hours.

While it gets cheaper at night, you may find you don’t have enough time to enjoy everything, so the savings are not justified.

If Lotte World isn’t the theme park for you, Seoul has others, and two of the top three, along with this one are Everland and Seoul Land. With a zoo, botanical gardens, you will find Everland more significant but it takes a little longer to reach.

Seoul Land is the one, which caters more for families with children, and the rides are not as thrilling as the other two. 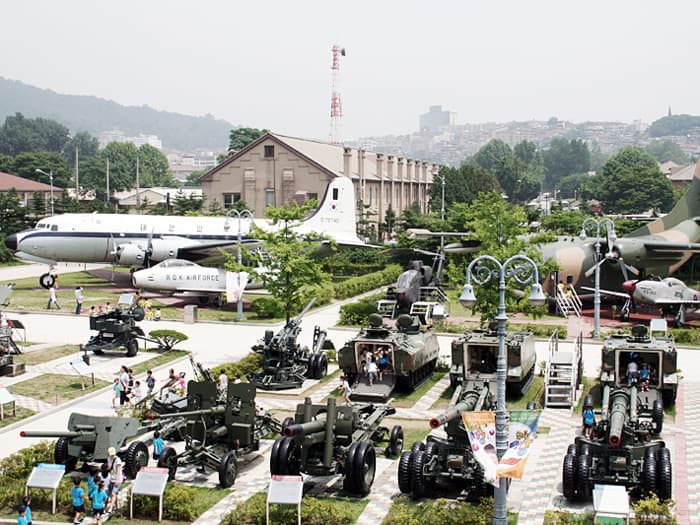 10. War and National Museums of Korea

The last of the places to visit in Korea are two of the best museums that will give you a full insight into the hidden gem in SE Asia.

While the war between the north and south was overshadowed by others. It was bad enough, and it is one thing that forms the fabric of the countries, which stand divided.

The Warrior Memorial is an intriguing stopping-off point during your city tour. You can see all of the military hardware and actual warrior monument, which is an educational facility.

The War Memorial for Korea is a somber tribute for those who sacrificed their lives in the
struggles for the freedom, which Kim Il-Sung intended to take from them, and for Koreans who have lost their lives during later conflicts.

The museum has approximately 33,000 artifacts, one-third of which are exhibited in the interior and exterior exhibitions halls. There are several exhibits on show in both the indoor and outdoor exhibition halls.

To gain a deeper understanding of South Korea’s history, the impressive National Museum hosts exhibits that range from the Paleolithic period to the defining years of modern Korea.

Although the impressive collection fell into danger in the Korean War, it was successfully taken into Busan, and carefully restored, at the end of the war. Now, the museum houses the most extensive collection of Korean artifacts, that you can find anywhere in the world.

It is an absolute must for anyone who wants a window on the nation’s past.

Seoul has lots more places and things to see that you can combine into days full of shorter experiences.

It is colorful, and the city is another that never sleeps, so it is possible to make the most of your trip no matter what time of day or night you want to experience the city of Seoul. 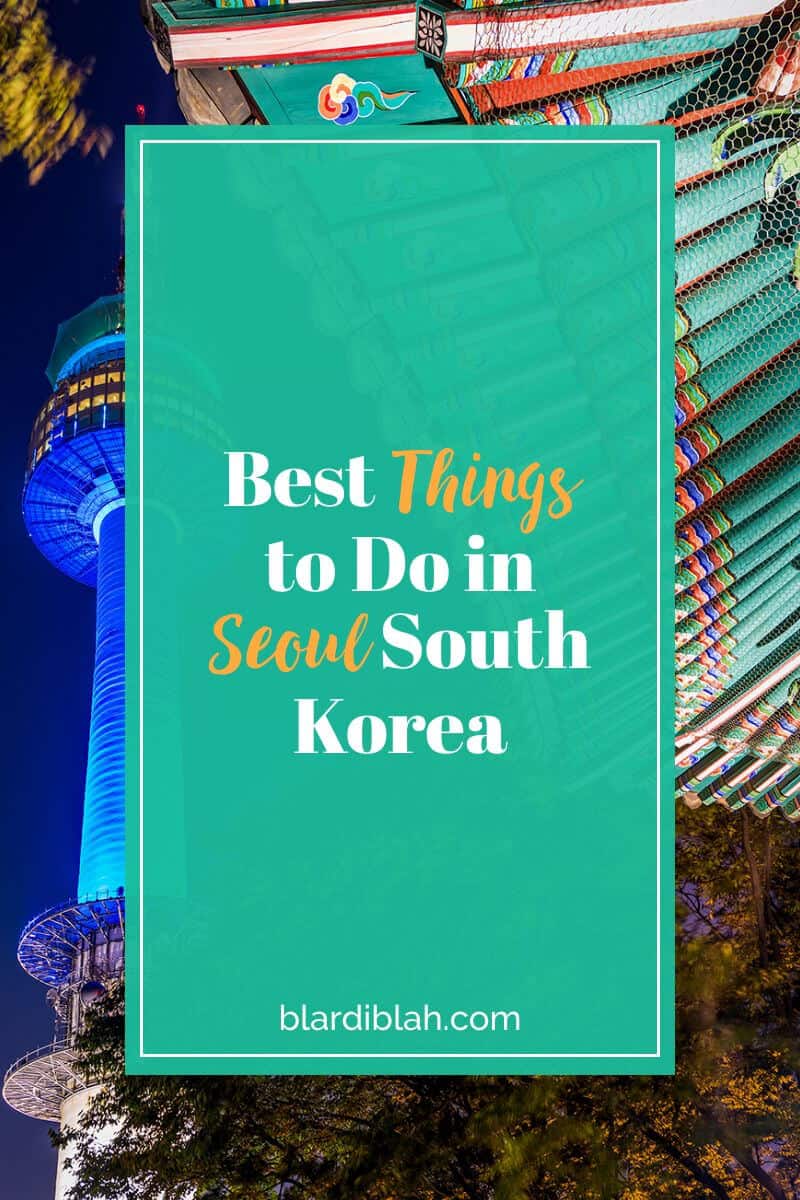