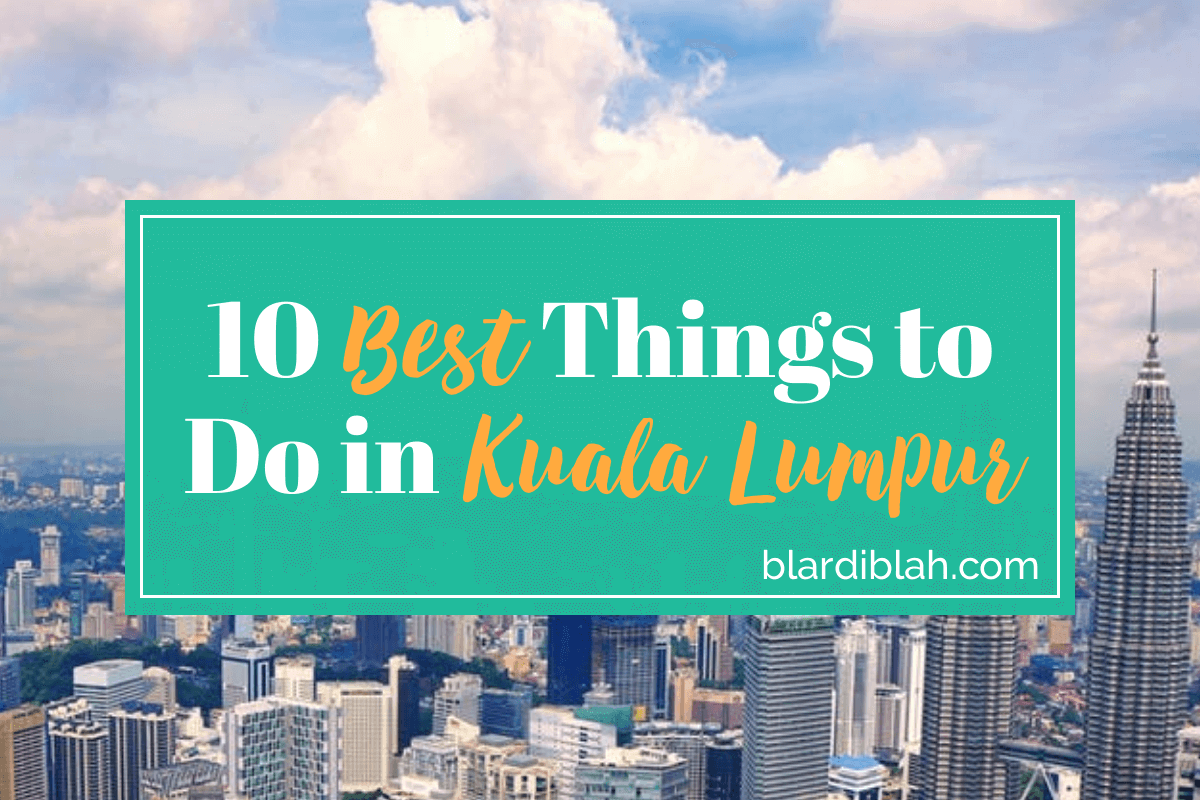 Kuala Lumpur is a melting pot of cultures and is used by many visitors as a hopping point to many other countries due to its ideal location.

In itself, tourism is the primary focus of Kuala Lumpur, and there is an abundance of things to do an explore for all the family.

With a depth of culture as well as the more modern, the city can be one of the most interesting places to visit in Malaysia.

With this in mind, here are the top 10 Kuala Lumpur attractions that make the vibrant city well worth a visit.

In no particular order, here are some of the things what to do in Kuala Lumpur during your visit.

This must be the top Kuala Lumpur points of interest because it takes such a dominant position on the skyline. It not only takes pride in the city but, it is an iconic building in the world because the two towers are the tallest in the world.

The Petronas twin towers not onlygive the best views of Kuala Lumpur, butthey also have many attractions inside for visitor.

For the kids, one of the best attractions inside the towers is the Petrosains Discovery Centre which is a 7,000 square meter interactive science park that is located on the fourth floor. Its focus is on how petroleum was created, but it can keep children entertained for a few hours.

With a cab ride of around 11km outside the city, you can visit the world-famous Batu Caves. After passing the giant statue, you can make your way up the 272 steps to the top which leads you deep into the 400 million-year-old limestone hill and the temple that was constructed inside it 100 years ago.

With other caves and shrines dotted around, it can take a good half a day to visit all there is to see. To keep the kids amused there is a ton of monkeys hopping around who look all cutesy-cutesy, but they are well known for leading you into a false sense of security and stealing food, sodas, and on occasion, they have taken cameras from unsuspecting photographers.

Nestled at the foot of thePetronas Towers is the Suria KLCC, and what you think is only another shoppingmall, you would be very much mistaken. With the 10,000 sqm.

The man-made lake is the musical fountains which are a treat to see after a full days shopping. During the day, the kids can make use of what has to be the most extensive kid’s playground that happens to have a free water park at its side.

Best saved until the afternoon when the temperature drops, it keeps the kids quiet while mom and dad take in some of the many other sites around one of Asia’s largest shopping malls.

At 50-acres in size, the KLCC park adds plenty of greenery and a relaxing atmosphere in such a busy city. It was designed by Roberto Burle Marx to accompany the Towers and the KLCC shopping center that it sits beside.

It gives access to the kid’s playground and water park and is also home to the musical water fountains which are a joy to watch in an evening.

The park itself is home to over 74 species of trees and a plethora of waterfalls, fountains which are scattered around the park and reflecting in the sunlight.

The park gives very different views of the city which are rare, and provide some respite from all the hustle and bustle that is going on a few short meters away.

This is the centerpiece of the highly regarded 60-ha Lake Gardens, which in itself has now been renamed as The Perdana Botanical Gardens.

The bird park also is known as the Taman Burung Kuala Lumpur, the covered KL bird park is touted as being the largest in the world. Opened in 1991, the park is now home to over 200 bird species from around the globe.

This can be a treat to take children to because most of the birds are allowed to roam around free and are used to being around people.

There is a walk-in aviary that is home to 60 species of both foreign and local bird species which include peacocks and the world’s largest species of pigeon.

Inside the park, many of the species are segregated into types so you can find the world of parrots, Flamingo Pond, Hornbill park and numerous others. Each of the species is free to fly around their respective enclosures.

For one of the most historical landmarks in KL, there is nothing that holds as much history as the Sultan Abdul Samad Building. It sits across the road from the old KL railway station, and unfortunately no longer serves any official purpose.

It was once the home of the Ministry of Information Communications and Culture of Malaysia, and since it ceased serving this, it has become one of KL’s most must-see places.

With all of its construction being of brick, it has plenty of gothic influences along with Moorish and other western styles.

It is full of porches, arches and curved colonnades which are topped with bright copper cupolas and a 40+ meter high clock tower.

The famous Central Market is close by to the Pasar Seni MRT station and a quick walk from Petaling Street, so it is easy to access rather than the need to take a cab. Although not ideal for kids, there are still some things that can keep them amused.

With artists, who will be more than happy to draw a picture of the children for a small fee, to the vast amount of must-try dining experiences of central Kuala Lumpur.

This doesn’t take away anything from the 350+ stores, kiosks where there is pretty much everything available form handicrafts, antiques, local batik, and souvenirs. Built-in 1928 as a wet market that supplied much of the produce until the 1980’s it was converted into the craft market that is found today.

The National Museum is locatedwithin a short walk of the botanical gardens. While being fashioned in theshape of a traditional house, albeit much moreextensive, it is an architectural wonder and is full of traditionaldesigns and a host of contemporary decorations.

Visitors can learn all about the history and culture, and for a full insight, it is one of the best places to visit in Malaysia and can see replicas of hunting displays, scenes from traditional weddings and old Malay houses of yesteryear.

Along with these, there is a broad range of national costumes and musical instruments being shown. The museum does have permanent exhibitions while many temporary exhibitions will change at different times of the year and are shown in the central hall.

The name precedes itself, and you will find Royal Selangor is the world’s leading name of pewter products. Around 20 minutes from the city center is the award-winning visitor center which sits on the edge of the another KL landmark, Merdeka square.

The square is home of the KL independence day festivities which is held annually. Sat at the side is the very English named Royal Selangor Club that was built in 1884, and back then it was the place to go for an afternoon tipple and the place to be seen if you were the center of colonial society. Nowadays it is still popular, but this time with the KL VIP’s.

The visitor center though has over 200,000 visitors per year, and for a start, it has no admission, so tours are entirely free.

Being shown are the world’s largest tankard and a tankard replica of the Petronas Towers which is made up of 7,000. As with any good place of this nature, you can watch demonstrations of the skilled craftsmanship that is employed in the bang up to dat factory.

The Malaysian National Mosque is a large imposing building and can hold 15,000 people at prayer time. It sits in the middle of a 13-acre patch of lush greenery. The mosque was built on the site of an old church in 1965 and is seen as one of the most important Kuala Lumpur attractions, if not the whole of Malaysia.

From a distance, you can see the 73-meter tall minarets and the 16 pointed concrete star which adorns the main roof.

The design was supposedly taken and supposed to resemble open and closed umbrellas. The main roof does use the concept of folding plates which increases the space in the central hall of gathering.

Like many other KL landmarks, there are plenty of reflecting pools and fountains in the surrounding gardens of the mosque.

Kuala Lumpur has far more attractions than are listed here, and many are delights in their own right. No food haunts have been touched upon, and you have the choice of street foods, or the best restaurants possible.

Even for children, there are numerous parks of all manner and plenty of roller coaster rides within close vicinity of the city center.

As the main stay or a part of a much more extended vacation, Kuala Lumpur has more than enough to satisfy the most hungry traveler. 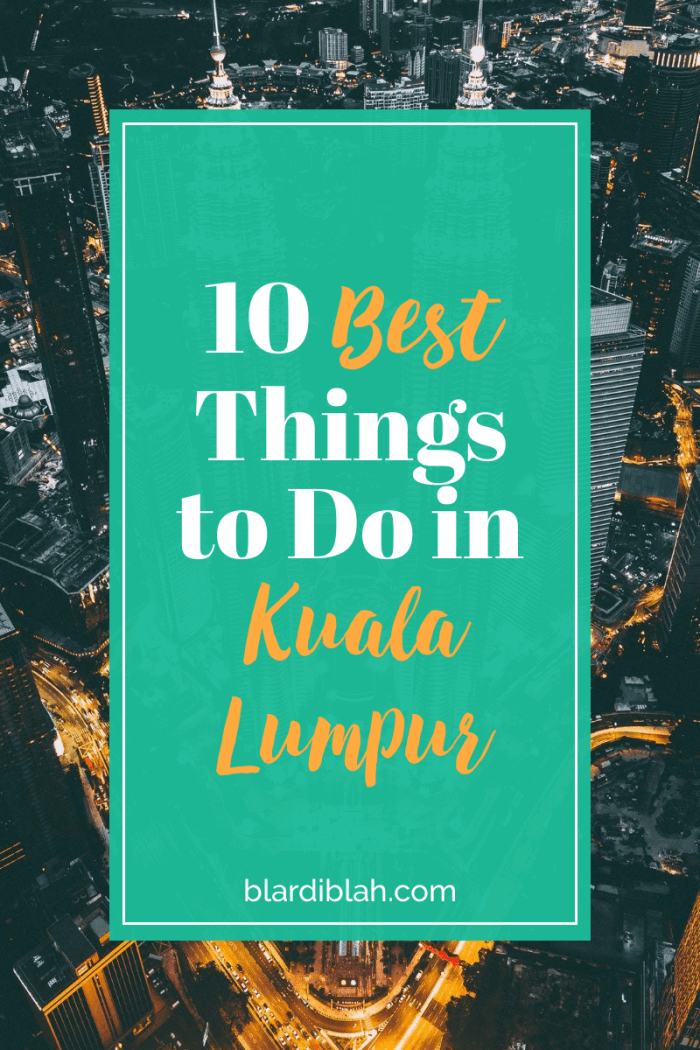