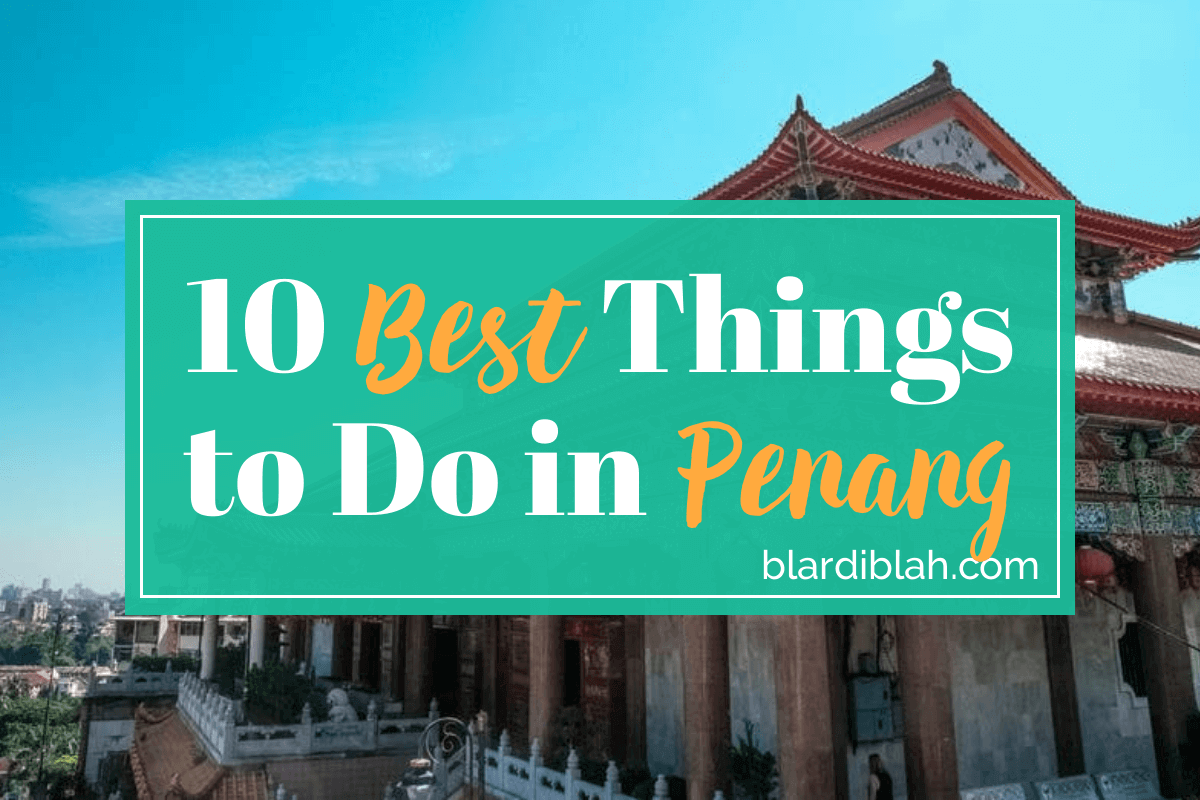 Penang is one of Malaysia’s most famous tourist spots, and this position it holds with very good reason.

With a large part of Penang being based on an island, there are a vast number of beaches, clear waters and that laid-back feel you can enjoy as well as experiencing the big city life.

Although much of Penang is advertised for the older generation, there are plenty of things to do and see that children can enjoy. So with all this in mind, let’s take a look at what to do in Penang.

Batu Ferringhi Beach is well known as being the best on the island and is a great place to take the kids.

With its crystal white sands and a plethora of watersport options, it is a great place to fill up on adrenaline from the jet skiing, windsurfing or parasailing, or you can be equally home just kicking back and watching the world go by.

After an afternoon relaxing, you aren’t that far from the Batu Ferringhi night markets which are great for finishing off the day at the most famous Penang beach.

It is far better to choose this beach with is better suited for kids than make the long hike to Monkey Beach through the National Park.

Although a beautiful place, it isn’t the most relaxing on weekends when it is full of locals who have gone for a beach picnic.

We have allsee clouds from the plane window, but this can enthrall all the family when youtravel through them to get to the very top of Penang Hill.

When things get a little too warm down in the city, you can take the entire family up the old funicular Penang Hill railway to a height of 812 meters above sea level until you reach the ridge that is more commonly known as Strawberry Hill.

From the top, you can see all around the island, or take in a Hindu temple. There is a snake show where the kids can have their photos taken with a tame python.

Being around 6km away from the city, the views come into their own at night when you can look down on the lights of Georgetown. It is one of a kind trip up the side of the hill in the train, and it does give a very different outlook to life on the island.

Standing atopanother hill is one of the top Penang attractions, this is the largest Buddhist temple in Malaysia, Kek Lok Si Temple .

There are three separate zones in the temple grounds. The first covers the entrance, all the souvenirs, drinks, and food stalls along with the turtle liberation pond.

The second section is home to all the temple houses, sprawling gardens a large pagoda and the pavilion of the four heavenly kings.

The final section being the hilltop which is host to a giant statue of the Goddess of Mercy, Kuan Yin.

There are also more gardens and smaller temples scattered around. The entire location covers 10 acres, so there is plenty to roam around, even the kids can enjoy looking around the maze of souvenir kiosks and the fish ponds.

Kek Lok Si Temple is carved into the face of the rock and also perched high above the slopes of Air Itam. The pagoda being the center of attention as its central tower rises up seven stories as is seen as the face of Kek Lok Si.

The Escape Park Penang is like no other theme park you or the kids would have visited, and for families who are fans of the great outdoors, this is the place for you. Being surrounded by lush greenery, there are over 20 rides and attractions to try out.

If you fancy being Tarzan for a couple of exhilarating hours, then this is your best shot. For something taxing there is the Monkey Business rope course, or for a few minutes reprieve you can slide down the Tubby Racer with the rest of the family.

When you land at the national airport in Bayan Lepas, you are not far from one of the best Penang points of interest that is on everyone’s list.

The Snake Temple is one of a kind, and there definitely isn’t anything else like it in the world. Not that you would be heading there before heading off to the colonial center of Georgetown Malaysia, but it will be on your must-see list for sure.

The kids will love this small temple, and it was after the death of Chor Soo Kong who built the temple, that the snakes arrived on their own free will.

Unfortunately, these days are long gone, but there are snakes the kids can have their photos with and there is a snake breeding area.

Just keep your eyes open because there are a few snakes still clinging onto the legend and have remained in the temple.

The one thing with this part of Malaysia is, there is a Penang night market on every single day of the week.

These can fit in nicely with something to do after a day’s adventure to grab some local delicacies or stock up on souvenirs before heading off home.

These have done wonders for Penang tourism because there is something there for everyone.

The Monday market kicks off the week and is one of the things to do in Georgetown at night for free.

MacCallum Street Night Market is a food lovers delight as is the Tuesday night offering of Tanjung Bungah Night Market which is great if you want to grab local dinner.

Wednesday is the largest and most crowded with Farlim Night Market, which is followed by the one close to Batu Ferringhi beach on Thursday’s and for the kids on Fridays, it is Jelutong Night Market.

For a relaxing stroll around Georgetown that can keep the kids amused are the numerous street art locations you can find.

Being better known as “Marking Georgetown” the street exhibition was commissioned by the government and contains 52 iron sculptures that explain the heritage of Penang in a highly amusing fashion.

If a look at the past finishes quicker than expected, then you can check out the Georgetown waterfront park that is still under various stages of construction.

However, the surroundings will give you an insight of what it will be like once it has finished, and it is well worth making an effort to walk along Gurney Drive to see the progress before it is completed and dine in one of the many restaurants.

In one of the quieter areas of Pulau Pinang is the area of Tanjung Bungah which is much quieter than the more touristy parts. It might be less commercial, but it does have a couple of things up its sleeves to keep the children occupied.

First is the floating mosque that when inside can give a 360-degree view of the sea. It has stilts supporting it above the water line, and when the tide is high enough it does give the impression it is floating.

After a quick spin around the mosque, it isn’t a long way to the ‘worlds largest’ toy museum. It is home to over 100,000 trains, dolls, and other collectibles.

For the big kids inside of us all, you will get a blast from the past and see some of the toys you more than likely played with many moons before. It can be a quiet way to finish off the afternoon before the sun starts to set.

The Peranakan Mansion is Penang’s way of showing all of their heritage and historical culturein one place.

It is a beautifully recreated Baba home from the 19th century and with a full restoration is shows the full depth of the Baba-Nyonya cultural revival.

Being home to well over 1,000 pieces of antiques and collectibles it can take a while to let all of the museum’s atmospheres soak in.

While walking around, there are many English, Scottish and European pieces of furniture and art.

Some Chinese carved wooden panels are also on display, and the place is littered with mother-of-pearl and ornately carved screen doors.

It might not be one for the kids, but for adults, it is a treasure trove of days gone by and how the island was influenced by outside forces.

This house contains a mystery, and as of yet it still remains unexplained. Deep in the Penang undeveloped jungle was found a house when a patch of land was purchased.

Who moved the granite blocks to the location, well that’s the mystery of this stone house deep in Rumah Batu.

It has since become known as the Durian farm which is nestled in 5 acres of Durian trees.This fruit looks intimidating covered in thorns, and its slightly pungent smell might put some peopleoff.

The good news is, it does taste better than it first appears, and once you have eaten it, the smell never seems to be as strong.

This is onePenang place to visit you will never forget, and although it is out of the way,it is hugely popular, as much for the fruit as it is for the house.

There you have the top 10 best things to do in Penang. Many are child suitable, but it is a far cry from what is available to do and see while you are here.

For vacations, you can make it as busy or as relaxed as you like, and the culture and heritage are like no other place you can visit.

Due to the tropical weather, and the fact you might be towing children along with you. Visiting between March and November might be too much for them and the rainy season falls during the same period.

The best time to visit Penang is from November up until March while the weather is cooler, and much more bearable. For a winter getaway, no other place can have so much diversity to offer. 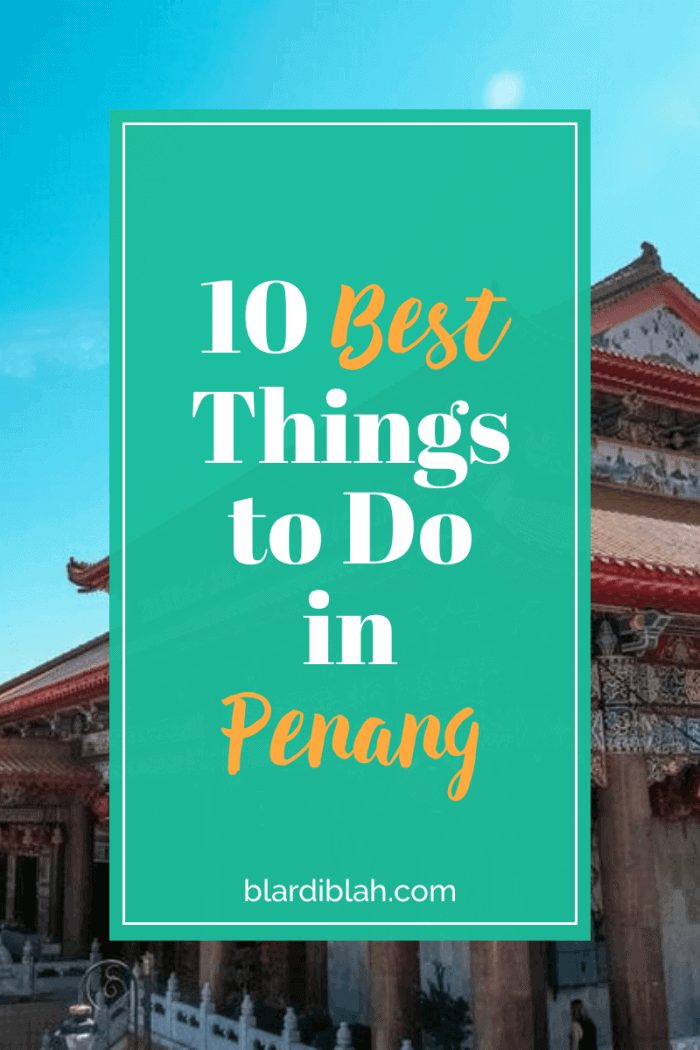