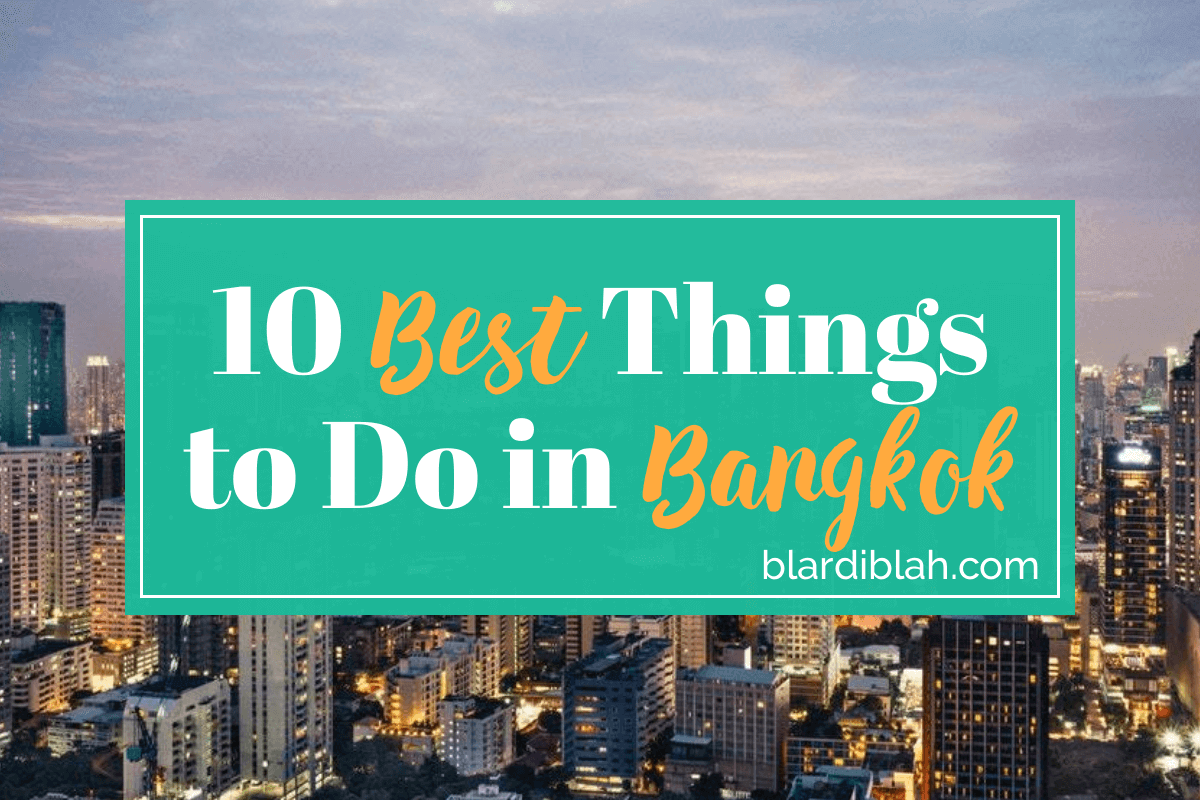 Bangkok is a city that is crammed full of chaotic markets, busy streets and a plethora of street foods.

For many, it can appear to be overwhelming, but underneath the surface, there is plenty of character and culture for anyone who is on vacation.

With over 8 million inhabitants, you can see people from all walks of life, so there is plenty of things to see and do which range cater to every walk of life.

Here are the 10 top things to do in Bangkok 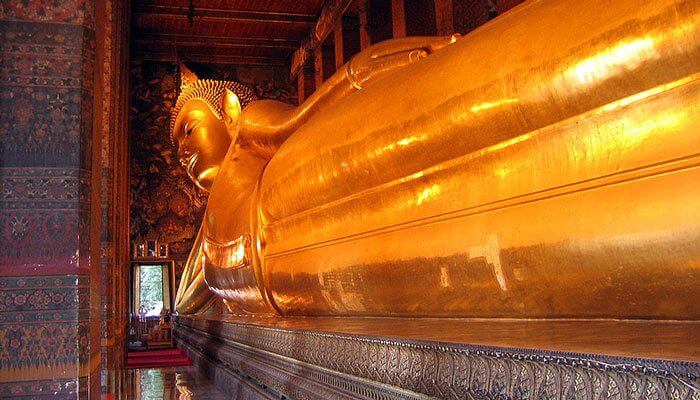 This massive Buddha is located at Wat Pho and is a must for any traveler to lay their eyes on. Standing at 15 meters tall, and 46 meters in length the Buddha is unlike anything else. The statue is covered from its head to its 5 meter long feet in gold leaf.

Buried in the temple are 108 bowls, and as you approach, you can buy coins to place in the bowls to carry on that little part of history. This history is supposed to be that putting 108 coins in the bowls leads to becoming perfect.

Wat Pho is also home to some sculptures, murals that cover everything from archaeology and astronomy to warfare. The massive temple houses landscaped gardens, statues, and stupas which are adorned with glazed porcelain. 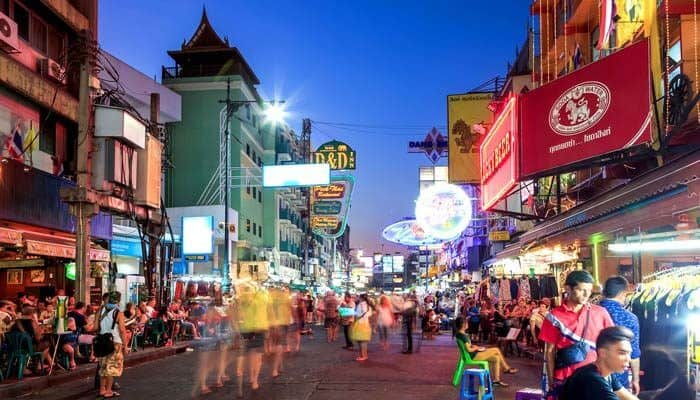 Buried deep in the Thailand capital is Khao San Road. This is a fun place to hang out, as can be seen by the many backpackers who pay the road a visit.

With lots of good buzzing vibes, it can be one of the best things to do in the morning with children in tow because there is plenty of places for them to search out in the hunt for some bargains.

Come the night, and things take a turn where it is a little more adult oriented, but fun none the less. The road is still full of stalls, but there are plenty more colorful characters roaming the street. 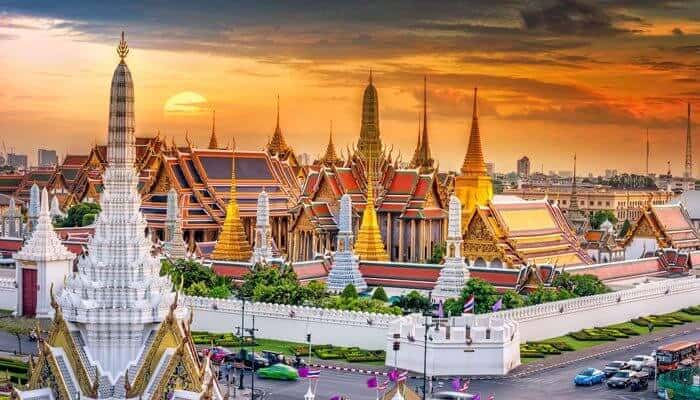 If there was one place any tourist should visit, and it has to be the Grand Palace. With several impressive buildings which include the temple of the Emerald Buddha, visitors can see the Emerald Buddha which is dated back to the 14th century. This is at the top of all Bangkok attractions.

One thing that might come to a shock to some tourists is the dress code that is upheld for all visitors.

If you are wearing flip-flops, you need to take a pair of socks, and men must wear long pants with a shirt, so it is another place to visit on the cooler ends of the day.

The Grand Palace Bangkok used to be home to the king, and also a place where the government of Thailand went about their duties.

A full trip can eat up several hours, so it isn’t something to fit in, and the kids might be better off doing some other activity. 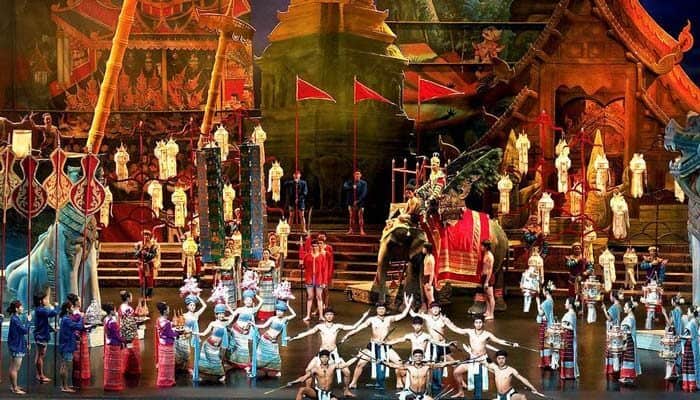 Just so the kids don’t feel left out when it comes to nighttime activities, the night shows of Siam Niramit are a trip back into history and culture while not once feeling like a history lesson. This has to be one of the things to see in Bangkok for kids of all ages.

Covering 700 years of history in a 90-minute show is an achievement, to say the least. The Ratchada Theatre is home to a miniature Thai village with a restaurant and souvenir shops scattered around.

The compound is decorated in full traditional style and has plenty of winged creatures from mythical Thai fables.

Kids can feed elephants, and that is even before the show has started. Being billed as one of the largest shows in the world, and not just South East Asia, this again is something the company should be proud of.

With three acts that starts at eight, the doors open at five, so there is plenty of time for kids to have their fill of the pre-show attractions. 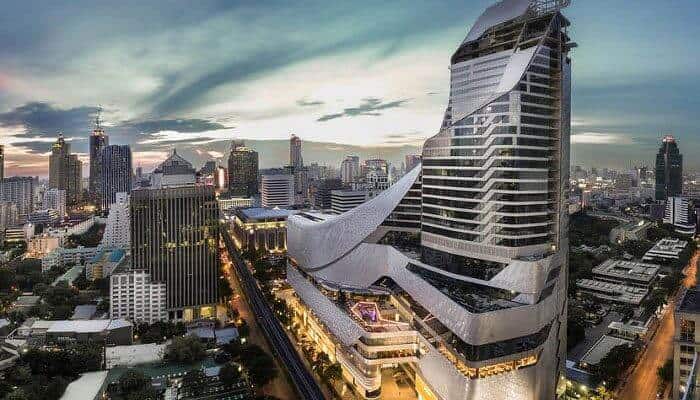 This could be one of the most unusual things to do in Bangkok, and anywhere else. Right in the heart of Bangkok stands a 49 story tower, but what makes this unlike any other is, it was never completed.

Being built before the global financial crisis, it now stands empty, and too large for anyone to do anything with.

With what appears to be a little dodgy, you can pay the security, and are free to climb to the top for some of the best views of the city.

It might be one hell of a climb, but once you reach the top and take a breather, you will be so glad you made an effort. 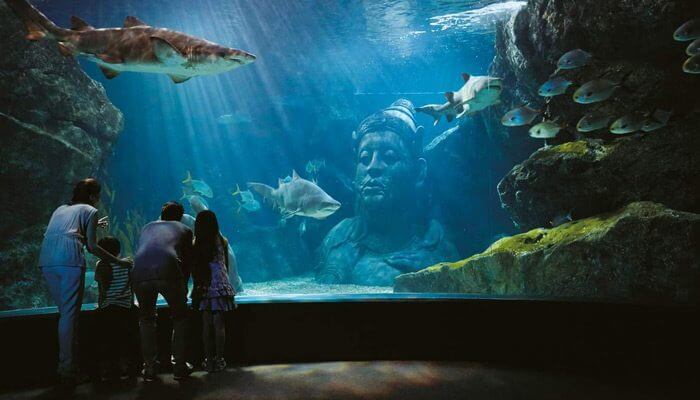 Sea Life Bangkok Ocean World as it is now called can be found two stories beneath one of Bangkok’s glitzy shopping malls Siam Paragon.

Being home to over 30,000 water creatures, it is one of the largest in this part of Southeast Asia and is the size of three Olympic sized swimming pools.

With fish and creatures that come as far as the Amazon, or from the dinosaur-infested Jurassic period.

Kids can walk through the 270-degree underwater tunnel, or take a look at the ocean from a glass-bottomed boat.

Kids will love it, and a few hours will be more than educational before heading upstairs for some shopping or grabbing some Bangkok cuisine for lunch or dinner. 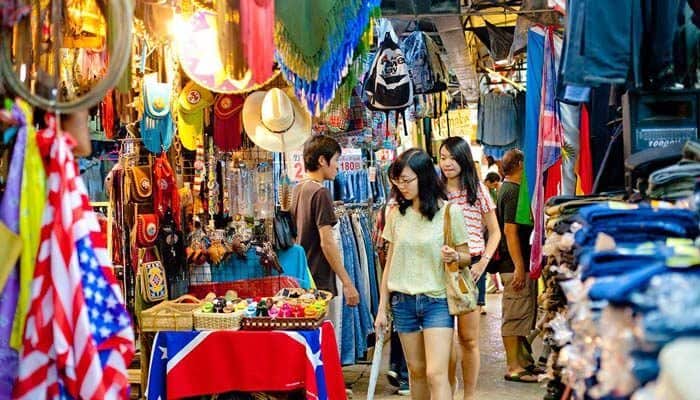 Visiting Chatuchak Market on either a Saturday or Sunday when it is open will be like no other shopping experience.

Guaranteed if you are arriving or leaving Bangkok via Don Muang airport on an evening, then there is no chance you won’t see this market glowing in the night sky.

With over 8000 stalls filling 27 acres, this market attracts 200,000 people each day. It’s not surprising it turns out to be one of the largest markets in the world.

The one advantage of scouring the many stalls is you will end up paying the same prices as the locals and not beefed up tourist prices. 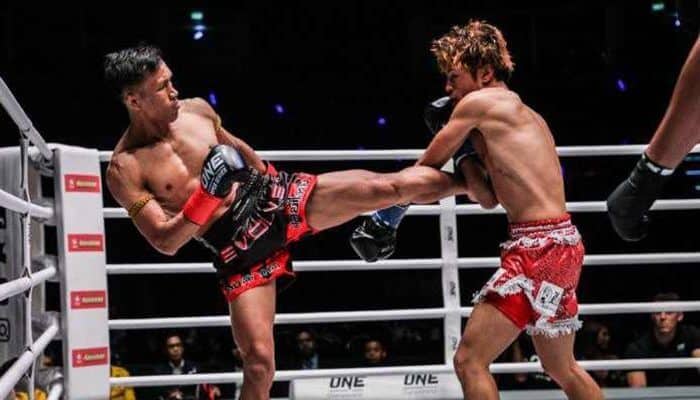 8. Take in Some Muay Thai (Kickboxing)

With two stadiums to choose from in Bangkok, there is no better place to watch the national sport of Kick Boxing.

Ratchadamnoen or Lumpini bring in some of the most massive viewing figures from any shows that are aired on TV.

However, there is nothing better than getting up close and watching the action in real life. With the local supporters losing their conscious thought of being immersed in the fights, they certainly lift the roof with their fever pitch shouting.

If you want to place a bet, then there are often bookies taking bets while walking around. 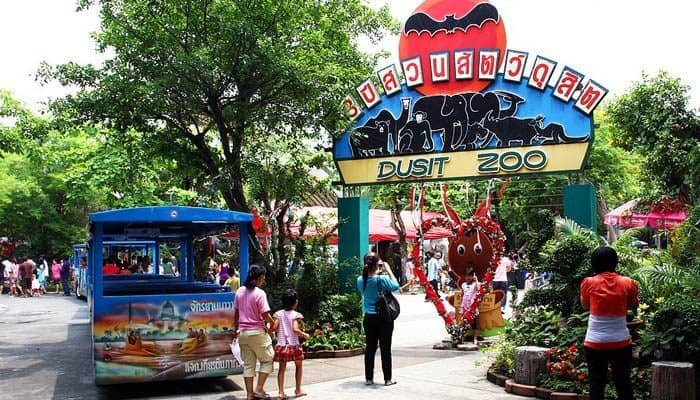 This is one for the kids, and the oldest zoo in Thailand is home to around 1600 animals of all types.

This includes everything from kangaroos, penguins, lions, tigers, alligators, and monkeys plus lots more, with this, tucked up your sleeve, you won’t be stuck with what to do in Bangkok for one of the days to keep the kids happy.

Rather than being a zoo just to watch animals, it is a working zoo which contains a train, a museum, and education center as well as an animal hospital.

Being built close to Dusit Palace and Parliament House, it was built by King Chulalongkor and was for a time his own private garden which sat close to the royal palace. 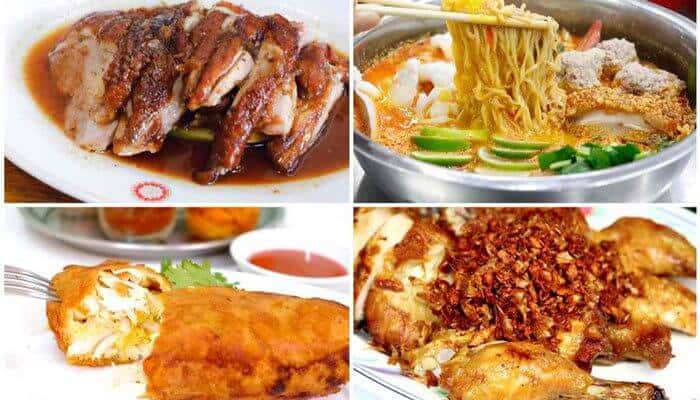 Although not advertised in many glossy Bangkok Tourism guides, there is no way you can come and not sample some of the foods from the food carts you can find all over the city.

Krua Thai which translates as Thai kitchen is on the mark, and although most people have heard of Pad Thai, there are many more delicacies available for you to sample.

If you haven’t tasted the food in Bangkok, then you haven’t visited the best part of the city.

Bangkok has three seasons in effect. Cool, hot and rainy, and depending on the kind of weather you can handle, or the sort of weather kids can handle will dictate the best time to visit Bangkok.

December to February is the coolest, but this is when most of the tourists are in the city. March to May is the hottest time of year, but it might be worth making a visit to see the Thai New Year.

After May is the run-up to October when the rainy season hits and what is classed as the city’s low season.

This also happens to be the cheapest time to snag some bargains on your hotel. Bangkok is an all year round destination, so to an extent, there is no best time, because any time will be the best time you have. 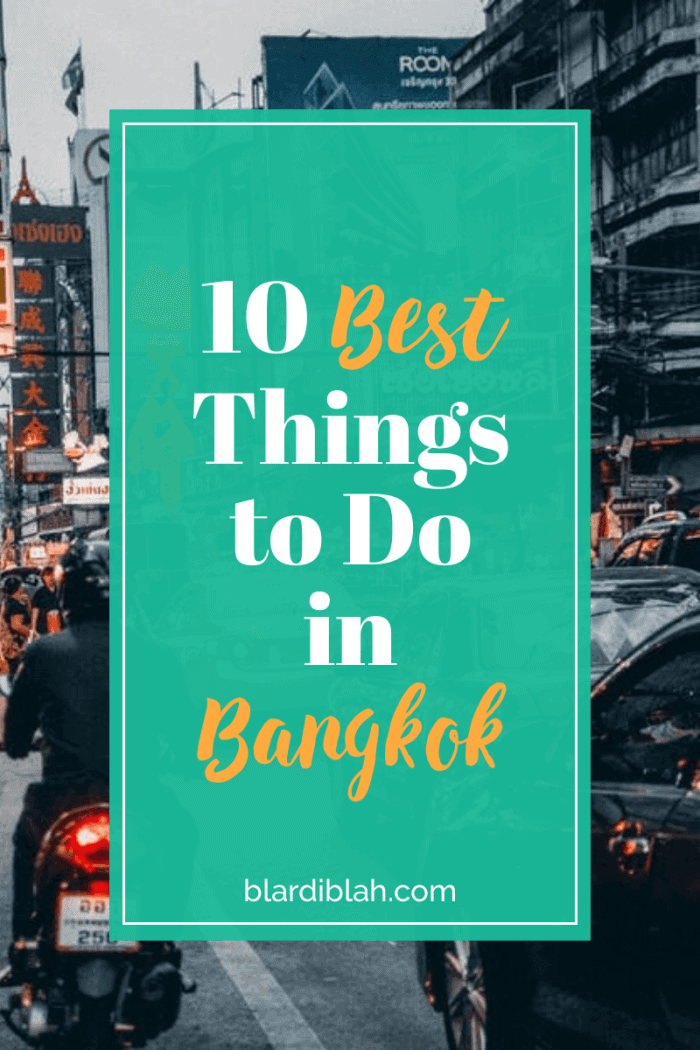