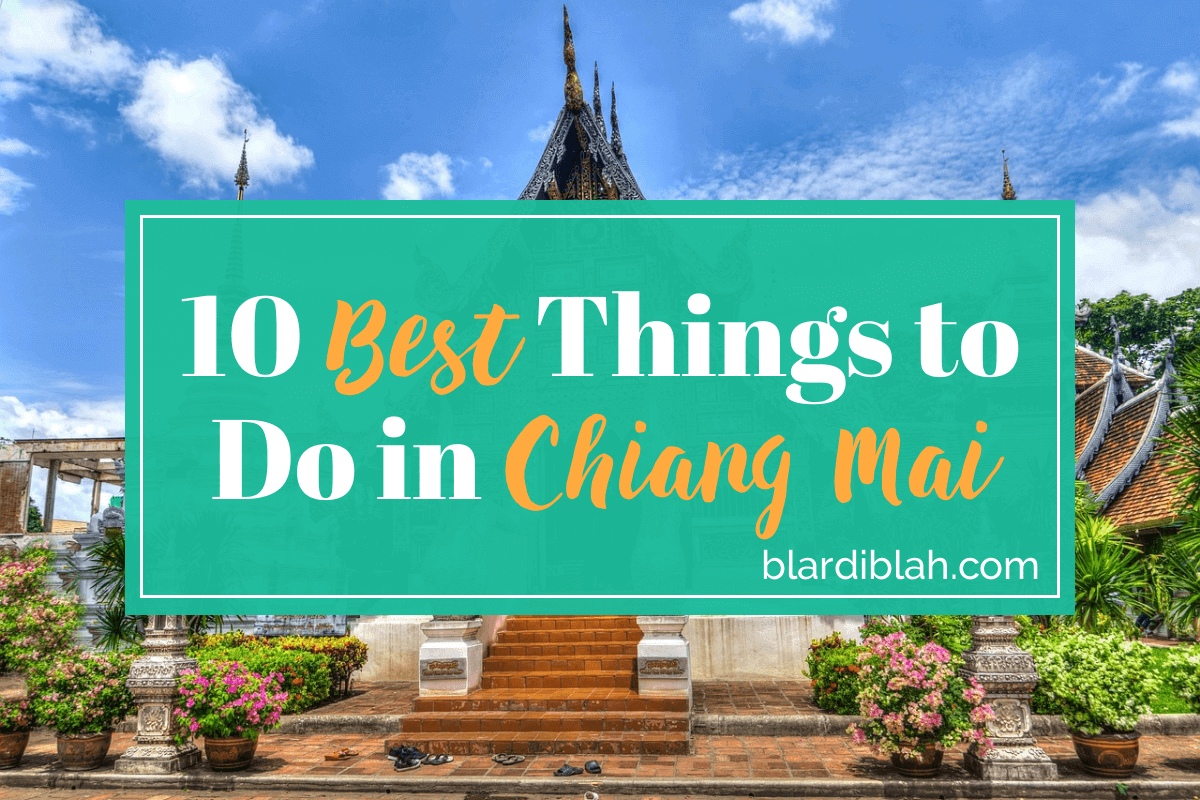 The Rose of the North, or better known as Chiang Mai is full of history and his home to a vast amount of magnificent architecture.

With a beginning that started over seven centuries ago, Chiang Mai became the capital of the Lanna Kingdom.

It includes over 300 temples which sit in the Chiang Mai weather which is more refreshing than Bangkok or all of the other southern sat regions, and very welcome.

For tourists to the area, this means longer sightseeing days without battling against heat and humidity and losing out to fatigue.

The locals have a laid back attitude and are some of the most pleasant in all of Thailand while the city has plenty of charm which will make any visitor fall in love with the area.

Building a list of what to do in Chiang Mai is hard, but here we go. 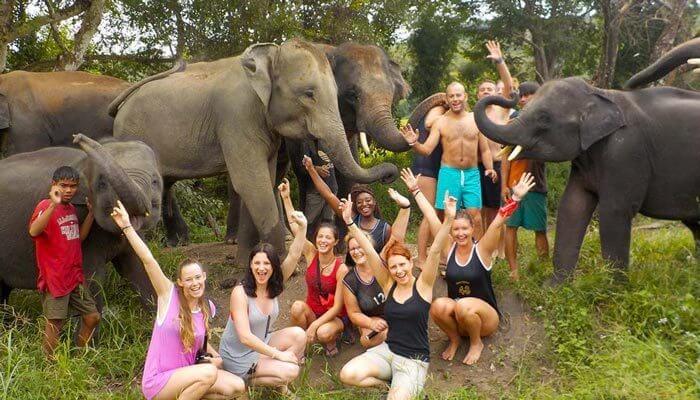 Thailand has a history of using animal abuse as a means of boosting tourism. But the Chiang Mai Elephant Sanctuary is a place that is great to take the kids while being committed to helping elephants that have been rescued from this abuse.

Like other sanctuaries of this type, you can see the animals in their natural environment, or help out around the nature park.

While the riding of the elephants is prohibited, it is an excellent introduction to these exceptional animals for kids of all ages.

It is one of the most worthy Chiang Mai attractions and isn’t the cheapest day out. But, you do get the experience of a lifetime. 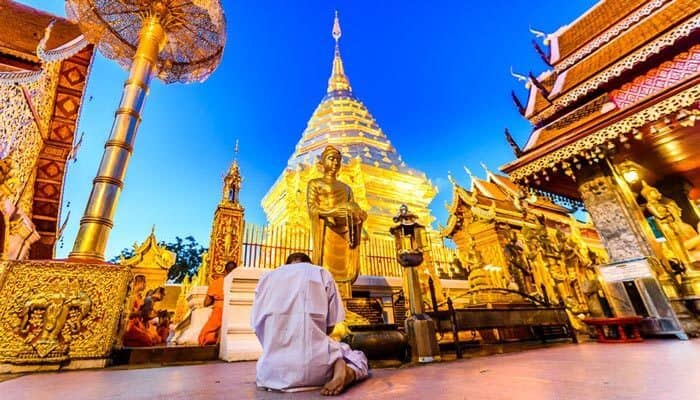 2. Take a Trip to Doi Suthep

Doi Sethup is one of those places that makes anywhere stand out around the world. Almost every cab driver will want to take to you what is the most famous Chiang Mai attraction.

It sits a short drive outside of Chiang Mai into the mountains which cast a fantastic view back over the city.

At 5400 meters up the mountain sits the Wat Phra That Doi Suthep temple that comes from the 13th century. This houses a replica of the Emerald Buddha and is also home to the large white elephant shrine.

After climbing the 309 steps and taking in the panoramic views, you can finish off the half day trip with a visit to see the ethnic

Hmong hill tribe which is situated inside the boundary of the Doi Suthep-Pui National Park in the village of Baan Doi Pui. Here you can see all about the life of the tribe and take in their colorful costumes and traditional handicrafts. 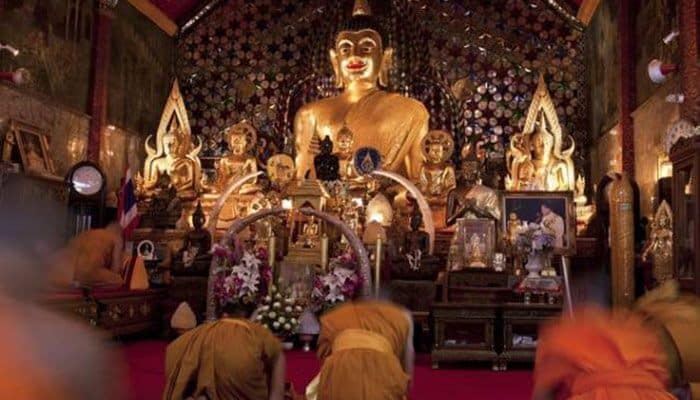 3. Find Your Inner Self with a Monk Chat

This might be a chance to escape from the children for a while and find your inner self. These take place around Chiang Mai, but the most popular location where you can sit and have a Monk chat is by the International Buddhism Center in Wat Chedi Luang.

These are held between 9 and 6 daily, and you can spot the monks hovering for their insightful talks to visitors. Nothing is booked, and all you need is your introduction and then sit to begin chatting.

Although these chats with the monks cost nothing, it is etiquette to leave a donation after you have been enlightened from their talks. 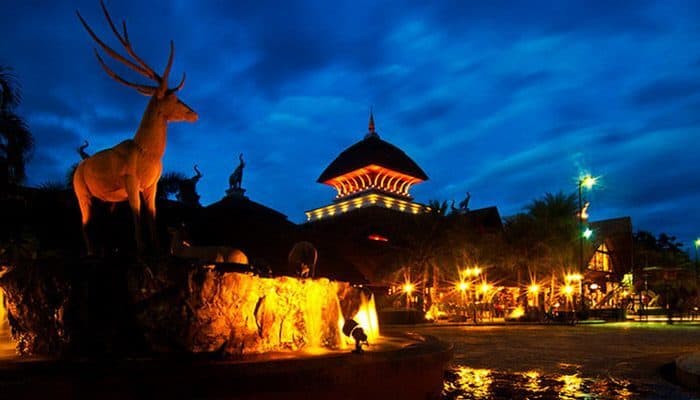 4. Take a Trip on the Night Safari

Although the Chiang Mai night safari was based on the Singapore Night Safari, it is double the size and reaches 300 acres.

It is a short ride out from the heart of the city (10km) and can be accessed by self-driving or taking a free minibus that runs each day from the Tourist police office which is located in the night bazaar.

This zoo is set out like a theme park and has three major sections where the animals can be seen. In the day you can walk around the 1.2 km long Jaguar Trail zone, and see all the big cats like Jaguars, White tigers, and leopards among others.

It is at night when things really come alive. The area is split into 2 zones which is the Predator Prowl Zone and the Savanna Safari Zone.

Kids will love this because you travel around the zones on an open-sided tram and is 5km in length for the trip.

Once you have traveled around the enclosures, there is the chance to watch the musical fountain and a water laser light show.

Be sure to time your tram ride because there are only 2 showings per evening. One at 8pm and the second at nine. 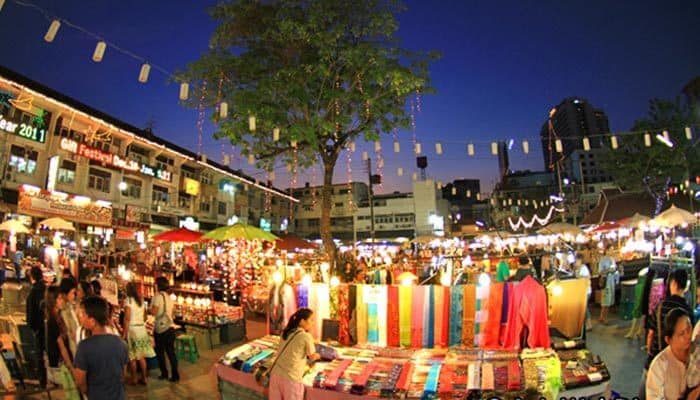 This is the central place for shopping and happens every night. The Chiang Mai Night Bazaar spreads out form the crossing of the Loi Khro Road and the Chang Khlan Road and spreads itself for 2 blocks in all directions.

Head too far in one direction, and you can find yourself heading toward the Pink River (Ping River).

This is fine because you can grab a drink and something to eat before working your way back up the streets and checking out all the handicrafts or jewelry.

The brightly lit stalls have more than enough things to check out for all ages of the family. Although it can be good to explore, be careful and hang onto your wallet because it can get rather crowded in areas. 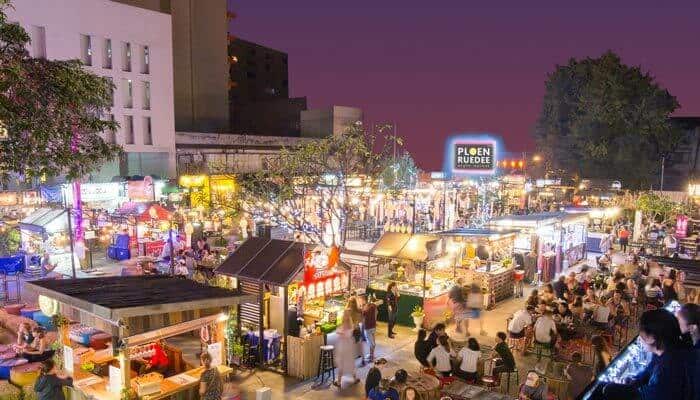 If one-night market wasn’t enough in this laid back city, it has two, but this one is a very different scene than shopping.

This international food market is an open-air drinking and dining experience like no other. Kids will love it because there are lots of foods which range from street food to the more traditional foods they can get back home.

Nothing is crammed, and you can walk around checking out the food before committing like it is a gigantic buffet. The tables and chairs are very much different unless you are used to sitting on a haystack to eat your dinner.

To the side of the Ploen Ruedee Night Market is a more traditional seating area where there is a live band and drinks are available.

If that isn’t enough, there is a famous branch of the Pink Pvssy jewelry store which is packed full of cheap items to browse through. 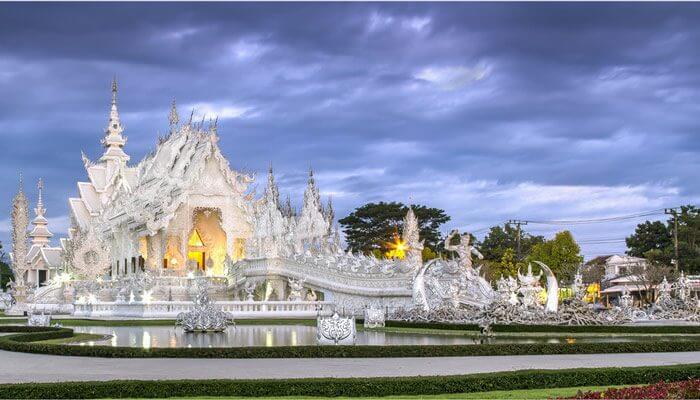 The White Temple is the more common name for Wat Rong Khun and is a very unconventional Buddhist temple located in Chiang Rai.

The temple as you can see by the title is entirely white which is supposed to resemble the Lord Buddha’s purity.

It was started to be built back in 1997, and it still hasn’t been completed, and when that day arrives, it will house nine buildings which will be home to all of the Buddha’s relics and belongings.

In history, Chiang Rai was founded in 1262 and later was conquered by Burma. In 1786 Chiang Rai became a Chiang Mai vassal where it later became a province of Thailand in 1933.

The temple is very different and unlike anything else you will see while visiting Chiang Mai or the northern Thai regions. 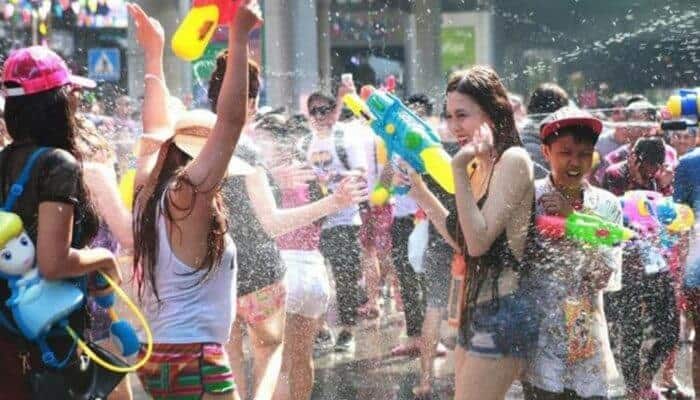 8. Join in the Songkran Festival

Although a busy time of year, between the 13th and 15th of April, can be a fun time to visit Chiang Mai to join in the Thailand New Year festivities. What is usually a short celebration is taken to the next level and lasts up to six days.

Songkran is a religious event, and the locals of Chiang Mai think throwing water will cleanse all your sins. You can see these ready and waiting to douse the next passerby.

One word of advice, taking a tuk-tuk isn’t enough to outrun a few buckets coming your way, and you will be a sitting duck.

Aside from this, there is lots of temple visiting, and images of Buddha are paraded around the streets.

This can be one of the busiest times to visit the city, and even the top hotels in the city such as the Akyra Manor Chiang Mai can be fully booked. 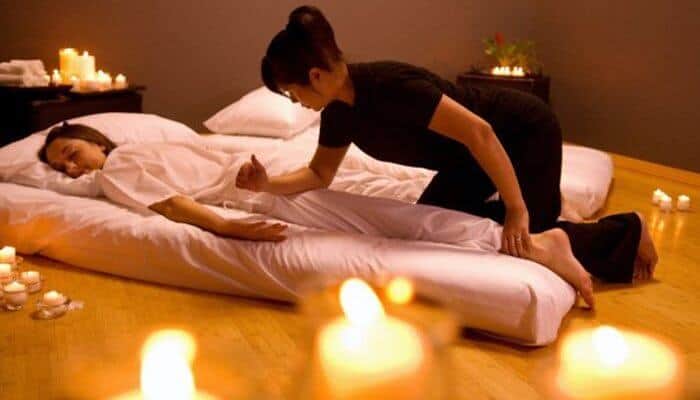 9. Get a Foot Massage from a Prisoner

This is one traditional Thai massage you won’t receive anywhere else. There are massage parlors everywhere, but the local women’s prison runs programs to teach the prisoners a trade before their release.

These women work in the ex-prisoner massage parlor to ply their trade so you can relax while leaning toward a good cause and helping the women better their massage skills.

There is no need to worry because the women are under guard at all times without affecting the relaxing atmosphere, so you can rest back and relax after a long days sightseeing and have a soothing foot massage. 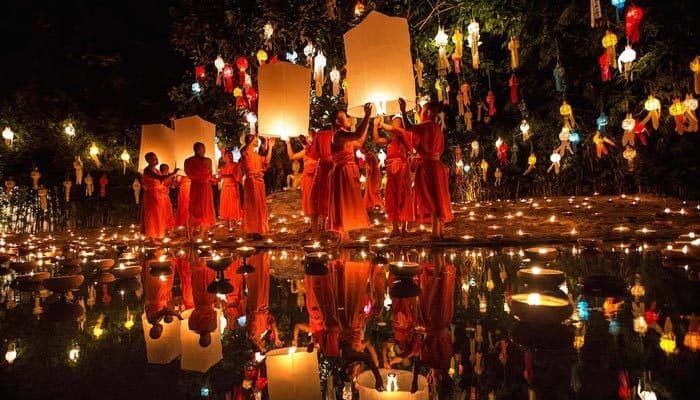 10. The Festival of Light

If there are any travel tips to listen to while you are in Thailand, it has to be to experience the Loi Krathong festival which takes place in the twelfth lunar month.

The festival has thousands of small lotus-shaped baskets which have a small lit candle sitting in the center.

These are placed in the water of the Chiang Mai moat which surrounds parts of the city and visitors and locals alike watch them float off into the distance.

If this wasn’t enough, the sky is filled with thousands of more lanterns which rise up. It is a remarkable event and one that should be seen by all members of the family. Children will remember an event like this for the rest of their lives. 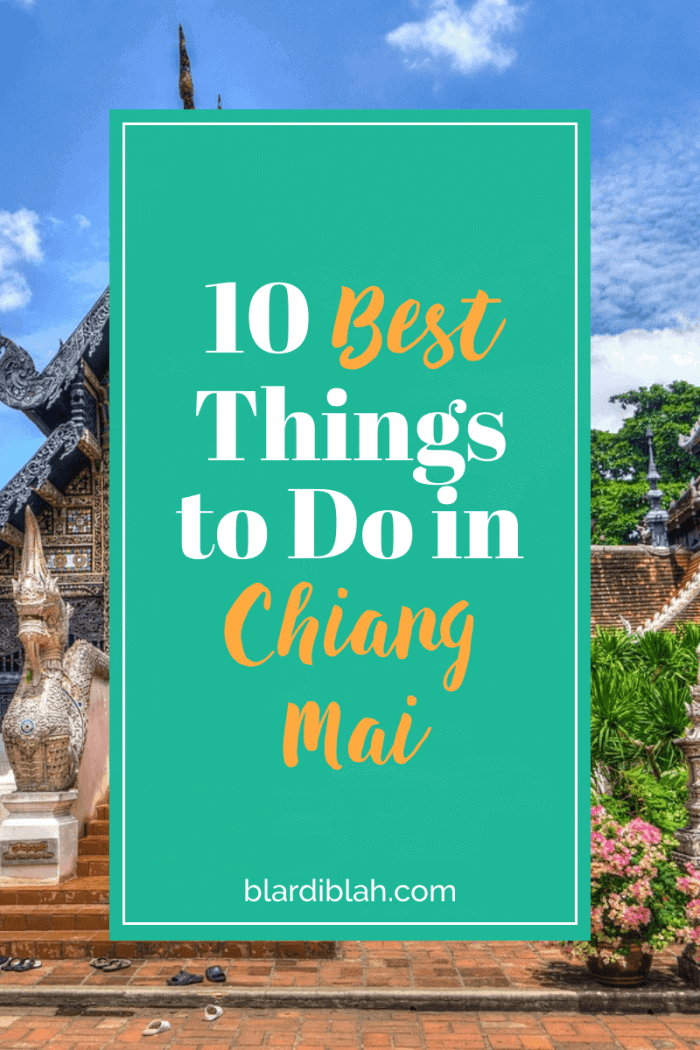