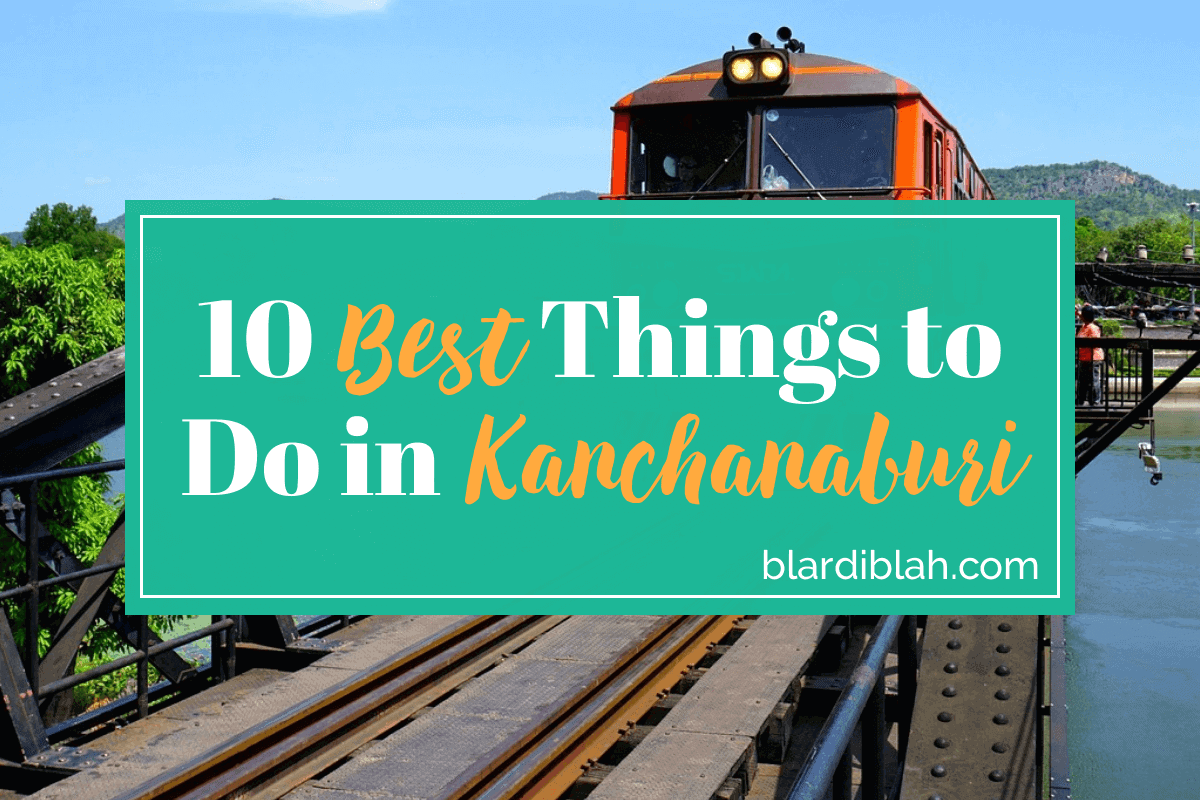 Deep in the Thailand countryside is the region of Kanchanaburi. It takes the Bangkok to Kanchanaburi train about four hours to reach the final destination.

The region is popular for tourists from all over who seek to escape from the crazy city of Bangkok.

This region is home to plenty of magnificent landscapes and natural beauty. However, it is home to some of the most well-known war history as any other place on the planet.

The area has been dramatized on several occasions in movies because of the impact it had on the war.

When you are looking at what to do in Kanchanaburi, there is much more than these war relics, but none of them should be passed up.

Even children who are tagging along can learn something first hand of the sacrifices that were made.

Here are 10 of the best Kanchanaburi attractions you can see and visit. 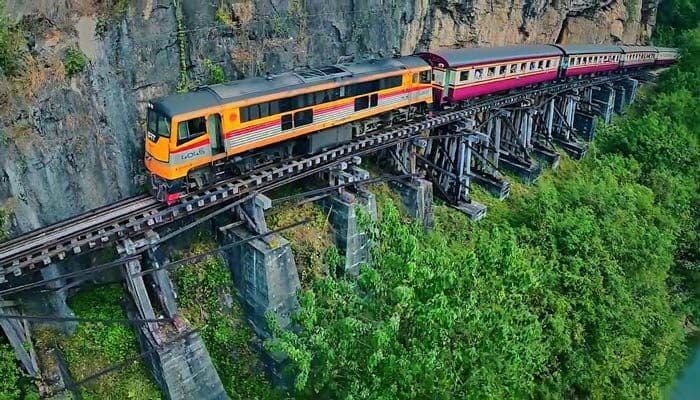 This takes in a few points of interest, and riding along Death Railway is like a train ride no one will ever forget.

If you arrive by train from Bangkok, you will stop at the Nong Pladul station. This is the beginning of Death Railway, and the first historic landmark is the Bridge over the River Kwai. The bridge itself is pretty ancient because the famous movie was filmed in 1957.

This is where children can learn how it was erected by the prisoners of war under the hand of the Japanese. After crossing the railway bridge, it will be time to make the crossing over The Wampo Viaduct. 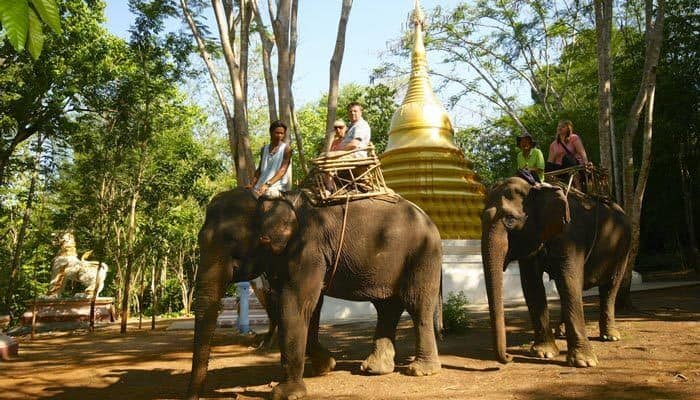 Not wanting to overload your kids with stories of the war, you can take a trip to Elephant World Kanchanaburi.

Here, like many of the elephant sanctuaries in Thailand, they take in old, abused or even sick elephants which were used in the lumber or entertainment trades.

This elephant sanctuary is non-profit, and any money they make is passed back into the sanctuary.

Kids have the opportunity to feed the elephants before they help make their lunch, and then they can wash and play with them. There is no riding of the elephants, but the joy children can get from being so close to these majestic creatures is a once in a lifetime experience. 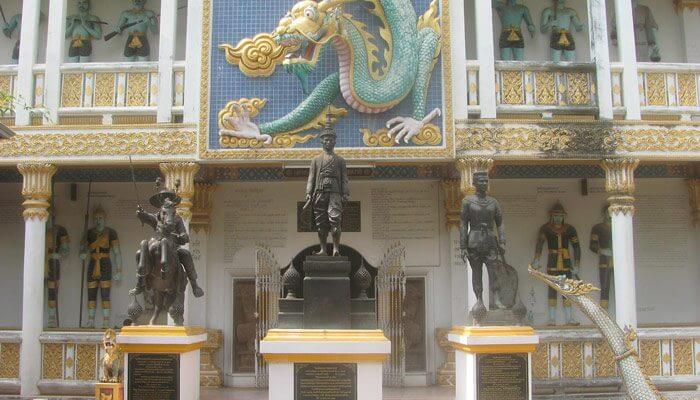 When taking any Kanchanaburi tour, it is hard to get away from the enormous amount of history there is, that has to do with the war.

One of the most informative places is the Jeath War museum (Japan, English, Australia/ American, Thailand, and Holland).

Here, it isn’t only displays of things that were gathered from the fighting, but it is built as an exact replica of POW camp. It is maintained by a monk and gives a unique look at the conditions prisoners had to deal with.

It includes bunks, authentic items, and displays of written accounts from the soldiers who were imprisoned there, or their family members.

It might be a little somber for children, but if they understand what they see, it is something they will never forget. It is a stark reminder of how things were, and how far we have come. 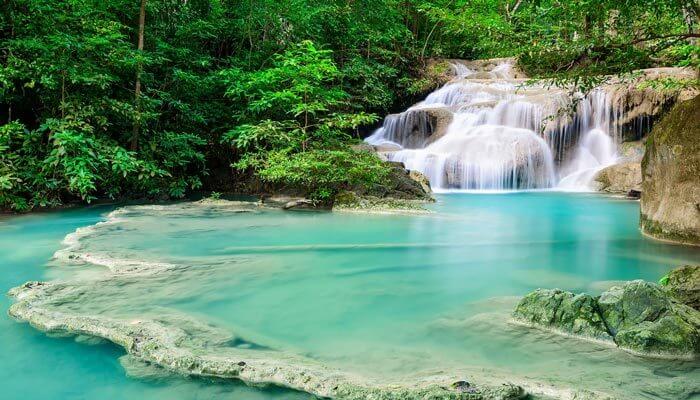 The Erawan National Park delivers a refreshing break from all of the reminders of the war that are scattered around the area.

Kids will love taking in the seven-tiered waterfalls which are the star attraction and is surrounded by plenty of lush vegetation and limestone mountains.

There are plenty of turquoise colored pools that are ideal for taking a refreshing dip after hitting the scenic trails or just to dabble your toes and let the fish nibble at your feet.

The park has plenty of other animals that you can see from gibbons, elephants and maybe a King Cobra or two.

After a rest, you can search out the Tham Phra That Cave which has four cavernous chambers that are holding some fine displays of stalagmites and stalactites.

Children will love the multi-colored rocks that are hanging or sprouting up from the floor. It will make them feel they are on a far off planet. 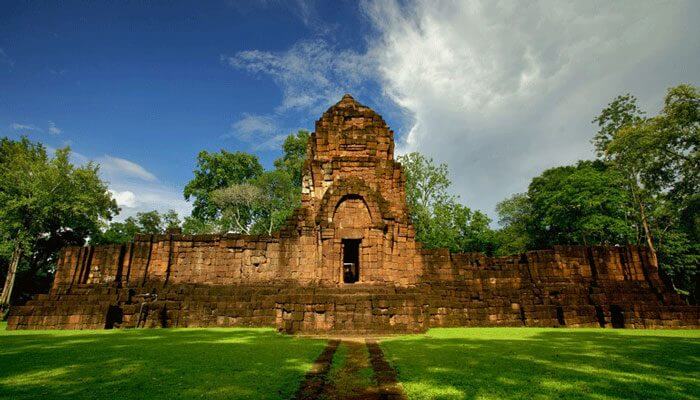 This site dates back to the twelfth century and is known as the Sanctuary of the City of the Lion. Muang Singh was thought to be an old trading post and garrison that sits on the banks of the River Kwai.

Over the years it has been renovated, and although not the largest, it does attract a mixed crowd of Thai and tourists on the weekends.

There are a preserved shrine, the old tower gates and some ancient inscriptions that adorn the courtyard walls. 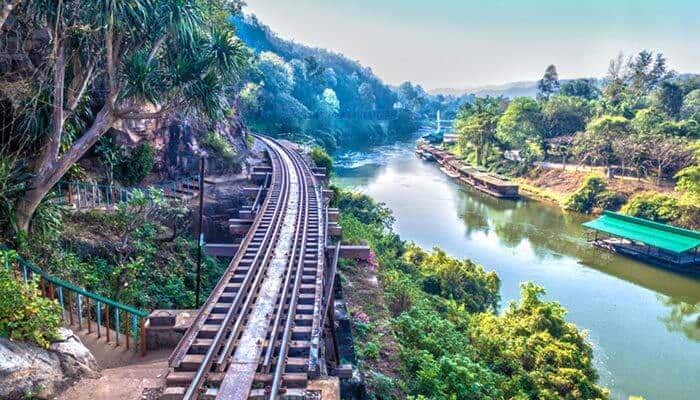 6. Take a Trip Down Hellfire Pass

Many of the war museums in the area are dedicated to showing the building of the railway or the condition of the PO camps, but the Hellfire Pass museum is a little different and is a must see the place.

This war museum is a hiking trail that shows the conditions the POW’s had to work in to build the railroad, and why there were over 100,000 soldiers who died doing so.

The pass is considered to be one of the worst areas where workers dug out by hand the massive 500-meter long gouge into the rock. Aside from the long hot and sweaty trek, there is an excellent museum at the start of the trek. 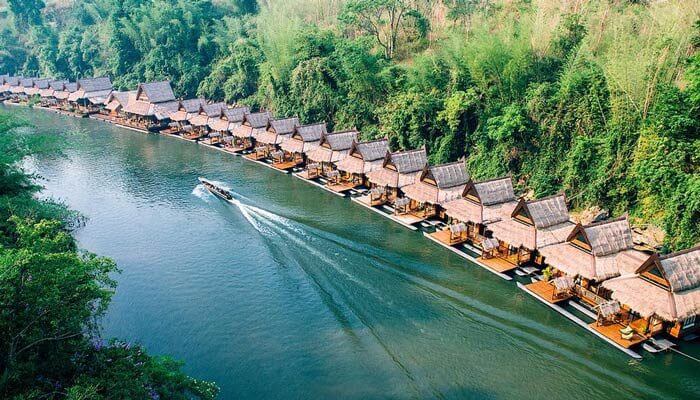 This national park sits about 100km from Kanchanaburi city. It covers almost 19,000 square kilometers and homes 19 protected sites between Myanmar and Thailand. The Western Forex Complex is very popular with locals and tourists in equal measure.

Its most stunning features are the number of waterfalls, historical sites, raft houses, and caves. The forests are split between bamboo in the highlands and teak in the lowlands that bank the Kwai.

Again, there are a plethora of animals roaming around from elephants, deer, wild boar, and monkeys plus lots more.

Sai Yok has some trails that are clearly marked, and a family can stroll around at their leisure rather than being taken around by a guide. May to October is the best time to see the waterfalls in their full glory. 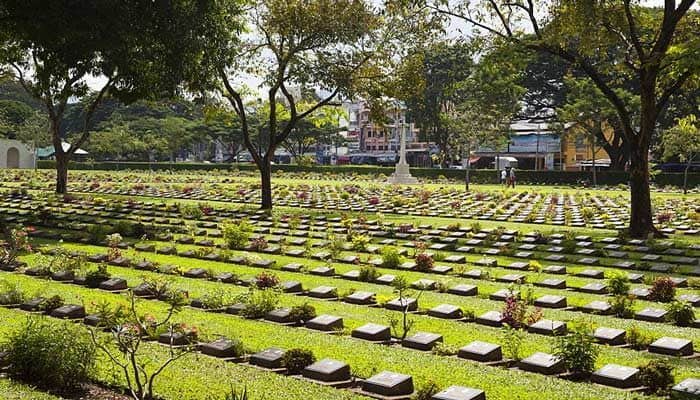 Even if you don’t visit for long, it is worth paying a visit to Kanchanaburi War Cemetery to pay some respect. There are vast numbers of graves in the cemetery, and almost all of them are from the building of the railroad.

All of the grounds are immaculate, and you can often see a veteran in uniform strolling among the graves.

Children can learn a lot from this sedate part of town, and although there is nothing exciting going on, it gives families time to reflect on how lucky they are. 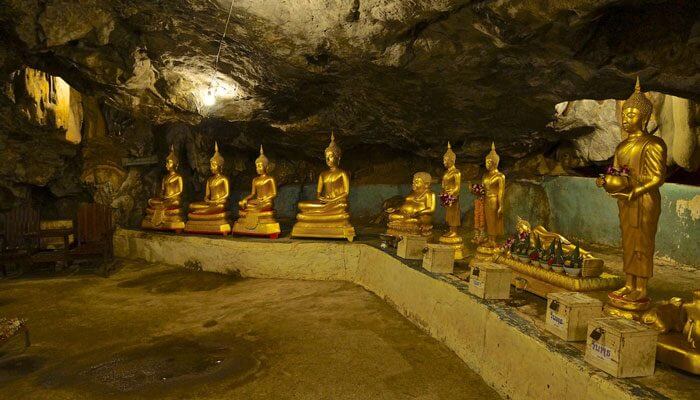 With a total of nine caverns that are well lit, these natural places are full of relics of Hindu and Buddhist shrines. This is the easiest out of all the cave temples to reach and is worth it for the glamorous views you can see.

The area was used as a POW camp, and many of the visitors to Wat Tham Khao combine it with the cemetery which is a little under 2km away.

If there weren’t so many lights in the tunnels, it would become easy to get lost or at least going around in circles.

Two of the most stand out caverns are the ones that have the hermit Ruessi and a large collection of Ganesha images.

The other stand out cavern is full of Buddha images of varying sizes, and a grand seated Buddha sits up the one corner. 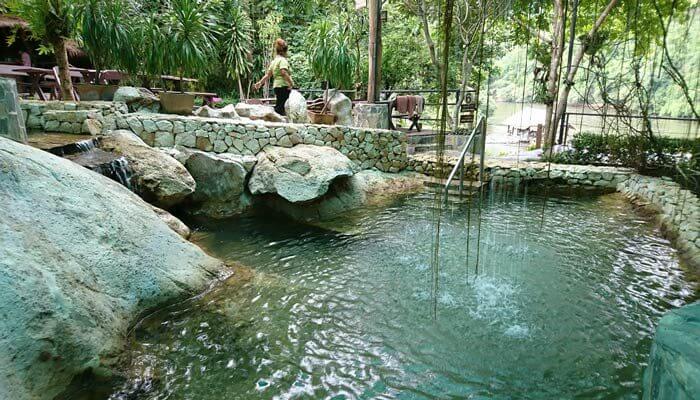 Kanchanaburi travel can be slow, hot and leave you all sticky. One final place you can relax and unwind in the hot springs at Hindad.

They are not as glamorous as the natural ones in the parks, but they can still be a welcome break from it all.

The good thing is they are sat right next to the river, so there is plenty of fresh water you can douse yourself in before climbing back into the steaming waters for another relaxing session.

If you are up for a traditional massage, there is a parlor in the grounds so you can leave relaxed entirely.

Kanchanaburi is a very different kind of trip to many others around Thailand. It is more of a scenic get away from it all sort of experience where you can reflect on life in general.

The reminders of the second world war are everywhere, but that isn’t all the area has to offer. Once you look and take in the stunning scenery in the parks, they alone can make a trip to the area worthwhile.

There might be plenty of tourists who visit the area, but it will be a very long time before it becomes too commercial and loses its charm. 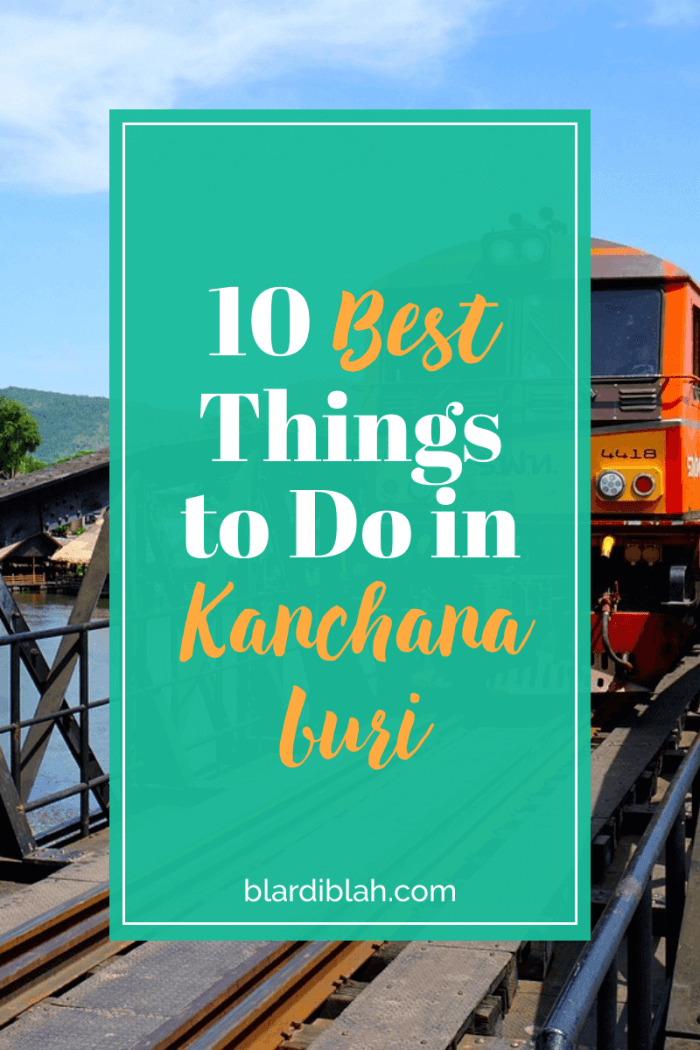