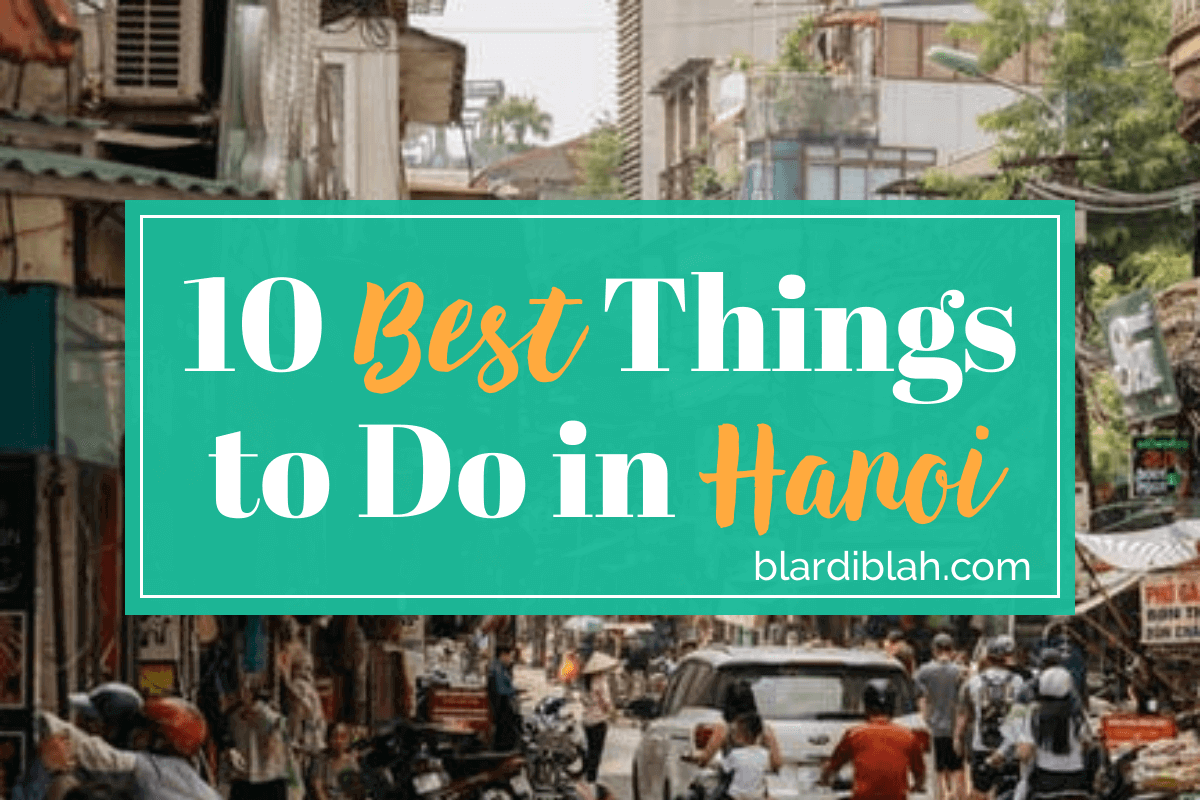 Hanoi is the capital of Vietnam and is one of the world’s most ancient capital cities. Hanoi is rich in history and full of legends while being a cultural mix of Eastern and Western influences from the French Quarter, Hanoi spans to other influences such as Russian and Chinese.

Traffic is hectic and fast-paced, but there is just a quick trip to the tranquil countryside where you can find yourself surrounded by mountains, traditional villages, and lush parks.

So, here are the top things to do in Hanoi. 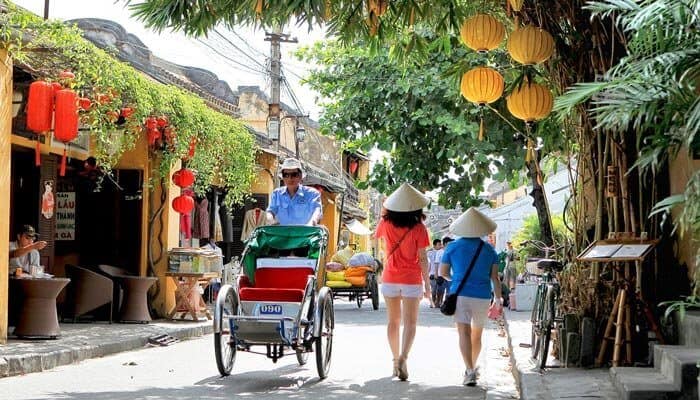 One of the best ways to become acquainted with the city, is to take a Hanoi sightseeing walking tour, this gets you down to street level, and you really get to know the choices of what to see in Hanoi with a little more time.

These last half a day, so they are not too tiring, and you are led around by local students. You get to find the best Hanoi attractions, hidden spots, and the best bars and restaurants.

While the kids may find it tiring, it really is one of the best things to do in Hanoi when you first arrive.

There are countless tours, and these can include finding the best Hanoi street food to soaking up the atmosphere in the French Quarter. Most of these are free, but a donation is always welcome. 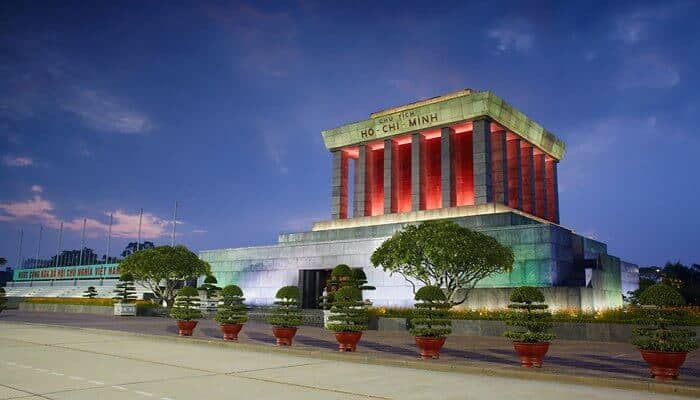 This is the resting place of the President of the Communist Party in Vietnam, Ho Chi Minh. It was here he read the Declaration of Independence and established the Democratic Republic of Vietnam in 1945.

The Ho Chi Minh Mausoleum takes inspiration from Lenin’s in Moscow, albeit with a Vietnamese twist. Being made of grey granite, the insides are polished stones that are grey, red and black and taken from all over Vietnam.

In the central hall is the embalmed body of Ho Chi Minh, and who is guarded at all times. When you are wondering what to do in Hanoi, this should be top of your list. 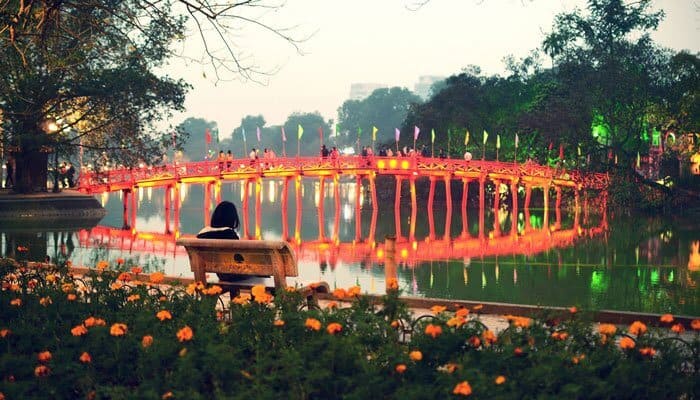 It was a legend that gave Hoan Kiem lake its name (Lake of the Restored Sword). It was a sword with magical powers that were used to banish the Chinese from Vietnam.

It was at the end of this ancient war where a giant golden turtle took the sword and took refuge in the depths of the lake and returning the sword to its rightful place.

For the kids, there may be glimpses of a few turtles here and there as it is the only lake in Vietnam that is home to them.

The Lake is famous among local Hanoians as a place to gather for families, nature lovers and general hanging out. You can always take a stroll early and join in the many Tai Chi exercises going on.

Fridays to Sundays are the best times to go to Hoan Kiem as local traffic is prohibited from the area. If you want to make a full day, the Museum of Ethnology is close by.

This gives visitors a glimpse of how the Vietnamese people used to live in their stilt houses. The whole area is out in the open and has lots of shaded areas where you can get out of the sun. 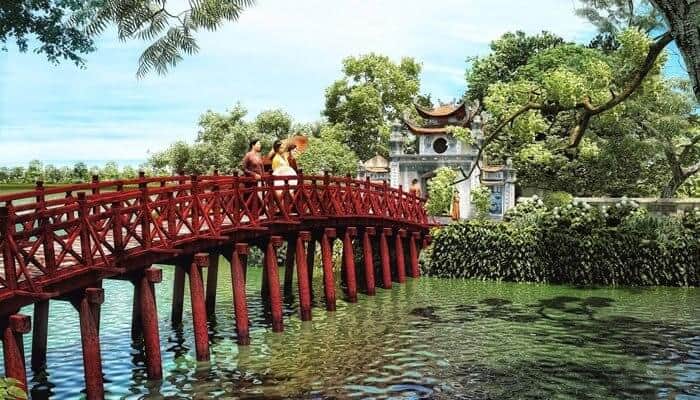 While time can slip by easily around the lake, you can take a quick visit to the Ngoc Son Temple, this is a large pagoda (The Ngoc Son Temple) which sits in the center of the lake. Access is using a narrow bridge.

The temple was built in memory of Tran Hung Dao a 13th-century brave military leader who fought the Yuan Dynasty.

The island, known as Jade Island is accessible by the famous Rising Sun Bridge. The Bridge is wooden and colored red, in classic Vietnamese styling. The pagoda and the lake are the most famous things to see in Hanoi. 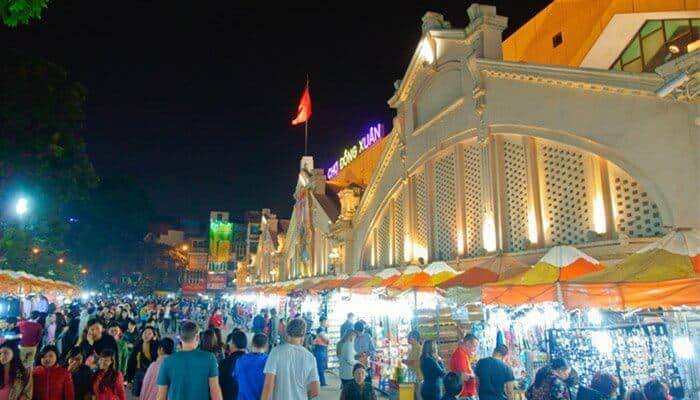 This market isn’t like a regular street affair. It began late in the 19th century, and the Dong Xuan market is located in a four-story building on the edges of the Old Quarters.

Dong Xuan is the biggest market of this type in the whole of Hanoi. The sights and smells can be in toxifying as you see all the local traders dashing around peddling their wares.

You can find almost anything here, and all at a somewhat marked down price compared to the high street.

On the ground floor, there is a wet market that is mind-blowing and worth seeing by itself. This can deliver something stimulating for the kids to explore as there is pretty much anything available from Dong Xuan Market. 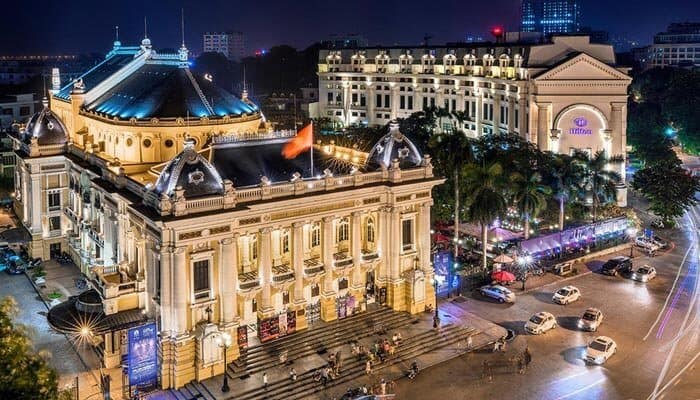 This might be better suited to the adults rather than dragging kids around. The Hanoi Opera House has lots of European influences which are easy to see, as the opera house was modeled on the Palais Garnier in Paris.

It is full of marble floors, French murals on the ceilings and massive chandeliers made from copper.

This can be one of the most glamorous Hanoi places to visit just because of the exuberance of the interior, and that is before you even see a show. One of the best you can see is the water puppet theatre, and this could please the kids. 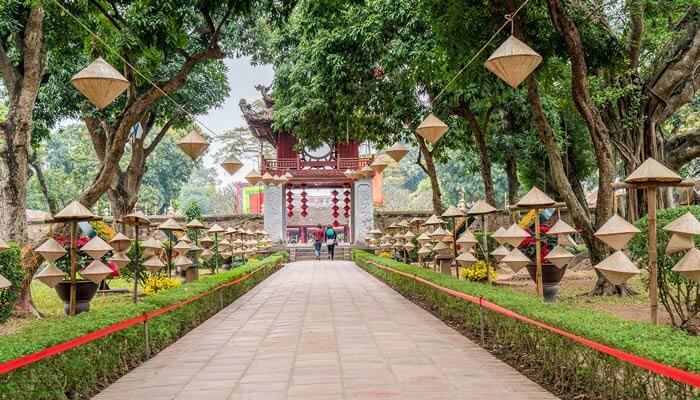 It was made with to serve as a university in 1070 and was became dedicated to Confucius and scholars.

The building is well-preserved and is a fantastic example of traditional Vietnamese architecture. The Temple of Literature is often one of the most frequently visited Hanoi tourist attractions.

The most successful scholars have their names engraved onto a stone stele which is the most acclaimed prize. This sits on top of stone turtles steles.

It is now a place that students come to pray for better grades. If this was the place to take kids and give them some inspiration, then this is it. 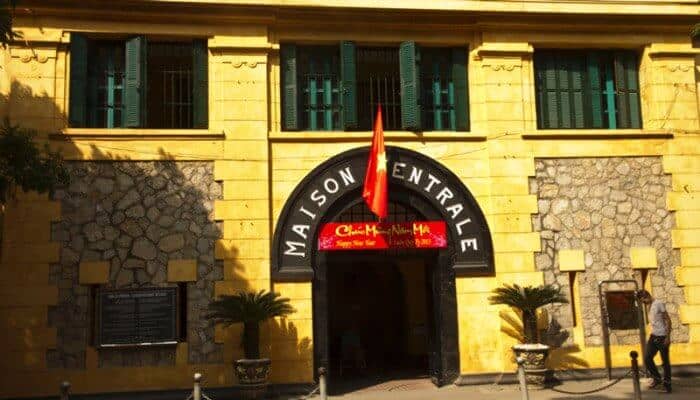 This is where you can learn all about the Hoa Lo Prison, which has the nickname as in the title. Visiting here will take you through a full range of emotions so it might be better that your children are left out of this one.

You will experience outrage, sorrow, and disgust at how something so wrong humans had to endure.

The museum educates you on all the suffering the Vietnamese went through under the ruling of the French during the early 20th century.

Much of the prison was demolished in the early 90s, but enough is remaining to give you a feel of how life was like.

In its place now stands the Hanoi towers. Many of the exhibits show how the prison was used to stop the Vietnamese uprising against the French and to gain their independence. 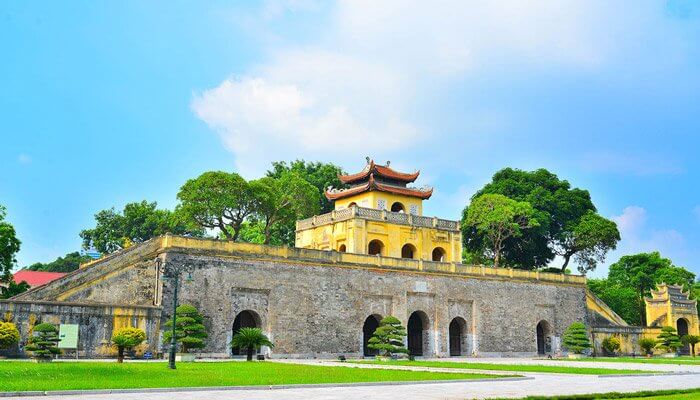 The Imperial Citadel of Thang Long is one of the places to visit in Hanoi that is right under your nose.

The citadel is located to plenty of other attractions, so it can be coupled up to make a full day of it, or you can take in a half day tour before relaxing.

One feature of the Citadel of Thang Long is the Hanoi Flag Tower, this stands 40-meters and offers fantastic views of Ba Dinh Square and the city center of Hanoi.

It is home to countless artifacts dating back to the 6th and 20th centuries. This includes ponds, wells, some old ancient roads, and old palaces.

Along with these were the usual things found such as coins, ceramics, and Chinese pottery. 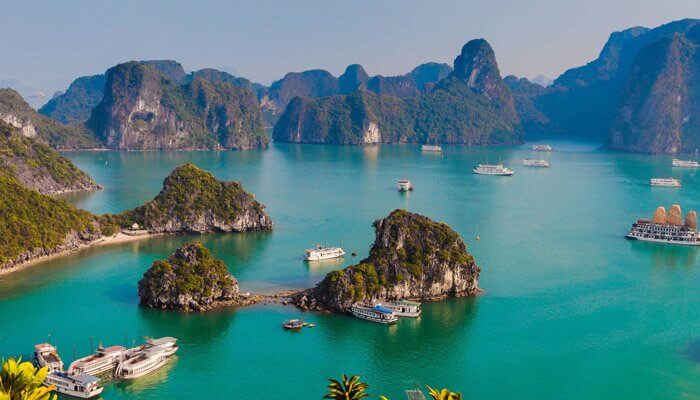 You might want a change than to visit temples all the time or stroll around the glitzy West Lake to sample some of the nightlife. The kids will love the last one on the list as it is pretty spectacular, to say the least.

Halong Bay is right near the Chinese border. It is comprised of 1,600 islets and covers 1,500 square kilometers.

It does look like something taken straight from a movie, and it is worth the trip. Being 170km away, it is a jaunt, or you can take a helicopter if your budget allows, and you can cut this down to an hour.

This really is a Hanoi must-see because of its natural beauty, and it is easy to see why it is one of the most famous locations in Vietnam.

Kids will love exploring the caves, or you can try your hand at spelunking in the Hang Sung Sot cave which is located on Bon Hon island. If that is too much, you can go scuba diving in the turquoise waters to check out the thousands of different fish. This really is one of the things to do in Vietnam above anything else. 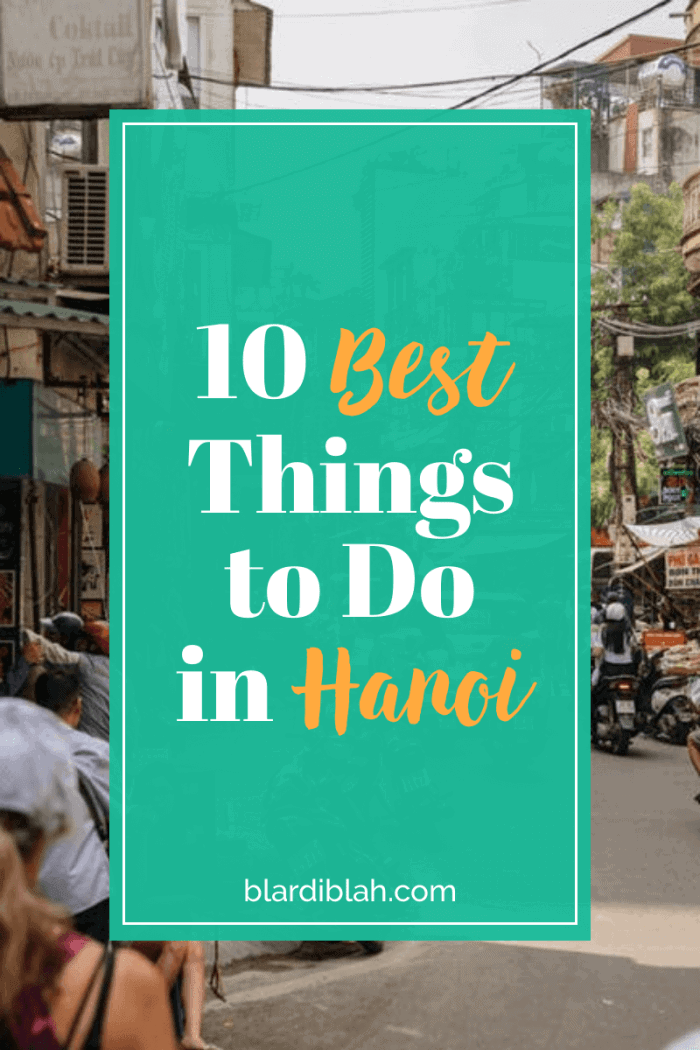